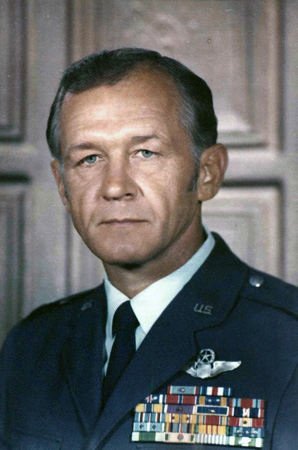 Retired Col. James Kasler, the only three-time Air Force Cross recipient and a former prisoner of war, died in Florida on April 24. He was 87, reported the Daily Journal. Kasler enlisted in the Army Air Corps as a B-29 Superfortress tail gunner, flying combat missions over Japan during World War II. After getting his commission, Kasler flew 100 combat missions as an F-86 Sabre pilot over Korea, where he downed six enemy MiGs, becoming one of the first jet aces. On June 29, 1966, Kasler earned his first Air Force Cross as an F-105 Thunderchief pilot leading a strike against a heavily defended target in Hanoi, Vietnam. Just five weeks later, he was awarded a second AFC for braving heavy ground fire while attempting to locate a downed pilot. His aircraft was hit during the search and he ejected, beginning six and a half years of captivity in North Vietnam. He was awarded his third AFC for resisting torture and keeping faith with his fellow captives through unimaginable hardship. Kasler ended his 31-year uniformed career in 1975 as vice commander of the 366th Tactical Fighter Wing at Mountain Home AFB, Idaho. In addition to his three AFCs, Kasler received two Silver Star Medals, nine Distinguished Flying Crosses, and two Bronze Star Medals, reported the Daily Journal. (For more on Kasler, see Valor in Three Wars from the Air Force Magazine archive.)