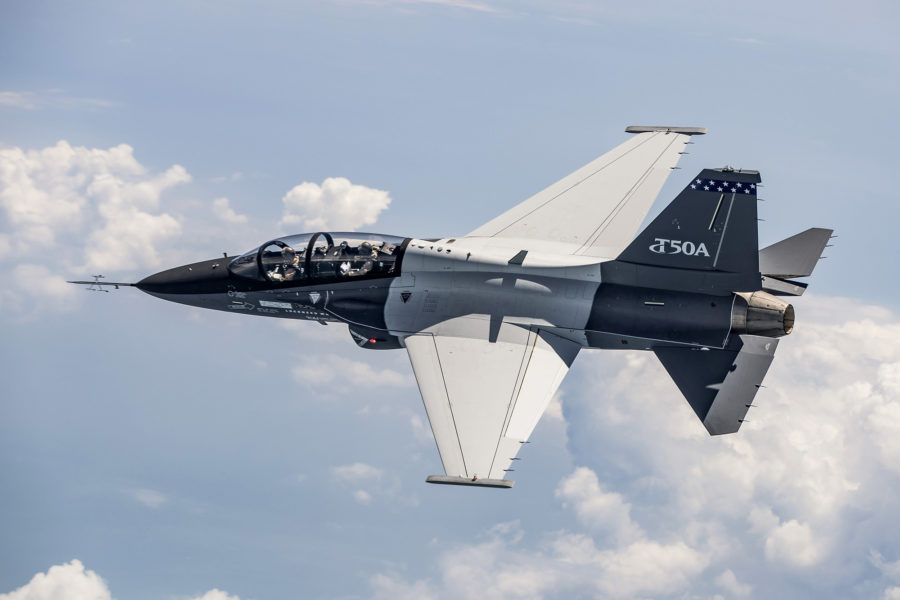 Lockheed Martin will offer a variant of its T-50A in the competition to build the Air Force’s new tactical fighter trainer rather than a clean-sheet design, the company said Dec. 14, insisting it will achieve “competitive pricing” with the aircraft. The jet was second in the T-X competition that Boeing won with a fresh design three years ago.

“Lockheed Martin has responded to both the U.S. Air Force and the U.S. Navy for their respective advanced tactical training programs,” the company said in a press release, referring to the Air Force’s Advanced Tactical Trainer and the Navy’s Tactical Surrogate Aircraft. “And, we look forward to developing competitive pricing for TF-50 aircraft programs that would meet the requirements as defined today.” A spokesperson elaborated that this goal will also cover “any new requirements that emerge in the future.”

The company’s T-X proposal “was based on a low-risk solution, the T-50A configuration that was aggressively priced to meet the requirements, including a 2023 [initial operational capability] date,” she said. “Since then, we have made significant advances in digital engineering and open architectures that are enabling affordability and at the same time, accelerating development, production, upgrades, and responsiveness.”

When queried about the ATT fighter trainer in October, Lockheed Martin said it would offer a solution to the ATT query but was reviewing the requirements and not yet ready to say if it would offer a new airplane, as Boeing did in the T-X.

Lockheed Martin and Boeing went head to head for the Air Force’s T-X, with Lockheed Martin offering the T-50A, a derivative of the T-50 jet trainer it developed with Korea Aerospace Industries. When the Air Force announced that Boeing had won that contest in September 2018, it said the company bid nearly $10 billion less than what the service itself expected to pay. Boeing has chalked up its win to advanced digital design, a streamlined software plan, and open-system architecture.

Lockheed Martin did not elaborate on why it is again offering the T-50 rather than a new, tailored design.

Lockheed’s ATT nomenclature of TF-50 is a hybrid of its T-50 trainer and the F-50 light fighter based on the T-50. Lockheed and KAI have sold variants of the airplane to Indonesia, Iraq, the Philippines, and Thailand.

“The designation depends on the configuration and the customer requirements,” the spokesperson said, noting that South Korea operates the jet in four configurations: T-50 for advanced jet training; TA-50 for lead-in fighter training; T-50B for the “Black Eagles” demonstration team; and FA-50 for light combat aircraft. The T-50A offered in the T-X competition was a “block upgrade to the baseline aircraft” with a fifth-generation cockpit, advanced avionics, and an embedded training system, aerial refueling capability, and “other enhancements to meet” Air Education and Training Command’s needs.

“The TF-50 is configured as a light attack fighter/trainer with additional enhancements to include radar, [electronic warfare] system, tactical data link, and other capabilities” to meet Air Combat Command requirements, she said.

The Air Force announced the ATT competition Oct. 12, saying it wants between 100 and 400 airplanes to serve as a bridge between undergraduate pilot training and frontline fighter squadrons. The goal is to offload much of the training now done on actual frontline fighters to the new aircraft, saving money and freeing the frontline aircraft for combat assignments. The program dovetails with ACC’s “Reforge” concept for overhauling fighter training. The Air Force wanted responses by Nov. 23 describing what companies could offer in terms of “feasibility, estimated cost, and schedule” for the first 100 aircraft. USAF has not said when it expects to introduce the new airplane.

Because the Air Force and Navy’s needs are so similar, USAF said contractors could simply submit the same information for both. The Navy wants a trainer to succeed its T-45, but its concept currently calls for student pilots to perform only touch-and-go’s on an aircraft carrier, not fully arrested traps. Consequently, the aircraft need not have an arrestor hook and associated equipment.

Air Force leaders have suggested—even before Boeing won the T-X—that the winner of that contest would likely see a secondary USAF market for tactical trainers and companion trainers, akin to the application of the T-38 in those roles over the last five decades. However, the Air Force has said the ATT is not a lock for Boeing and that the service wants competition.

Moreover, while Boeing has said the T-7A could be modified for combat tasks, it lacks the external hardpoints the Air Force wants in the ATT and has only an optional aerial refueling system. The T-7A design was focused on Air Education and Training Command’s requirements for the T-X and not toward future derivatives, Boeing said at the time it was selected.

The ATT requirements specify that it must be able to carry various sensor or electronic warfare pods and/or external fuel tanks.

Air Combat Command is also looking at buying or leasing a handful of advanced trainers to prove the Reforge concept before the T-7A is available, and Lockheed is a competitor offering the T-50 for that requirement.

The Air Force requires that the ATT have a secure open architecture. Preferred capabilities—desirable but not mandatory—include a zero-zero ejection seat and an automatic ground collision avoidance system as well as a helmet-mounted display system.