Skip to content
The Marietta F-35 Team marked a milestone on April 28, 2020, as the 500th Center Wing, or CW, was shipped to the F-35 Final Assembly line in Fort Worth, Texas. Lockheed Martin photo.
Expand Photo 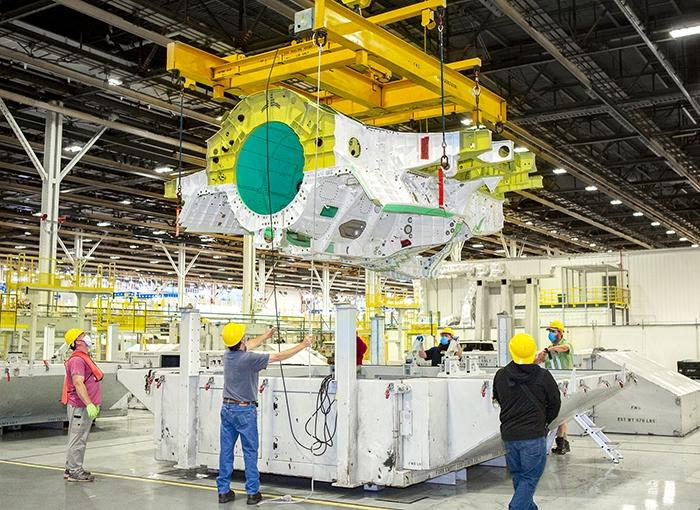 Production of the F-35 fighter in 2020 will be up to two dozen aircraft short of the planned 141 jets, due to a reduced flow of parts and a COVID-19-imposed work slowdown, Lockheed Martin announced May 19.

“At this time, we expect to see an impact of approximately 18-24 aircraft,” a company spokesperson said. A slowdown on the production line is due both to “supplier delays” and the need to adjust work schedules and manning of assembly stations to preserve worker safety, he said.

“Lockheed Martin is taking proactive measures to mitigate impacts and position the line for the fastest possible recovery,” the company said. Lockheed is “tapering” the line over a three-month period while “continuing to accelerate payments to small and vulnerable suppliers, adding it expects a “return to pre-COVID-19 production levels in the fall.” The 18-24 jets is a worst-case scenario, and if production of parts accelerates in the next few months, “We could see this number decrease,” the spokesperson said. It’s not clear how many of those aircraft will be F-35As for the USAF.

Financial impacts on the program are “consistent with what we’ve reported previously” and will be shared during the next earnings call, he said. In its April earnings call with investors and analysts, Lockheed projected a $375 million impact on reduced F-35 sales due to COVID-19.

In recent weeks, Lockheed has accelerated $450 million in payments to suppliers to keep parts production moving. Last week, it added another $300 million to that figure, bringing the total to $750 million.

In a separate announcement, Lockheed detailed an agreement with the International Association of Machinists and Aerospace Workers to create an alternate work schedule for the F-35 line at Fort Worth, Texas. The new scheme is designed to “maintain their skilled workforce.”

Starting May 23, each shift will be divided into three groups, each of which will work for two weeks and then take a week off. Those working more than 96 hours in three weeks “will be compensated an additional 24 hours for their week off while receiving full pay and benefits.” The arrangement affects about 2,500 employees.

The changes create “a work rhythm that retains the expertise of the talented workforce and provides opportunities to adjust work to better support production,” at somewhat slower rates.

After three weeks, the company will evaluate how the new scheme is working and adjust the schedule as needed until September 4, when it expects it will resume its previous pace of production.  Lockheed and the Machinists have also agreed that employees may volunteer to be furloughed for 30 days, maintaining benefits but not pay during the downtime.

Joint Program Office director Lt. Gen. Eric Fick said in a statement that the JPO continues to work with Lockheed and its other industry partners to “overcome challenges associated with COVID-19 while ensuring the safety of our respective worforces.” The two will partner to “devise agile solutions to lessen the effects of COVID, and work together to continually reassess and recover schedule as pandemic conditions evolve.”

Lockheed Martin delivered 134 F-35s of all three variants in 2019, which was three more than originally planned. If production does not accelerate in the fourth quarter, it would mark the first year since 2011 that production would see a decline from the previous year’s total. Lockheed delivered more than 488 F-35s prior to 2020. Industry sources said the price per jet could also be affected by the situation.