Skip to content
Lockheed Martin has selected an Airbus location in Alabama and its own former C-5 Galaxy building in Georgia as the sites where it will build its LMXT next-generation tanker, if it wins the Air Force KC-Y contest, expected to be awarded in 2024. In this artist's concept, an LMXT, based on the Airbus A330/Multi-Role Tanker Transport, refuels an F-35. Lockheed Martin illustration.
Expand Photo 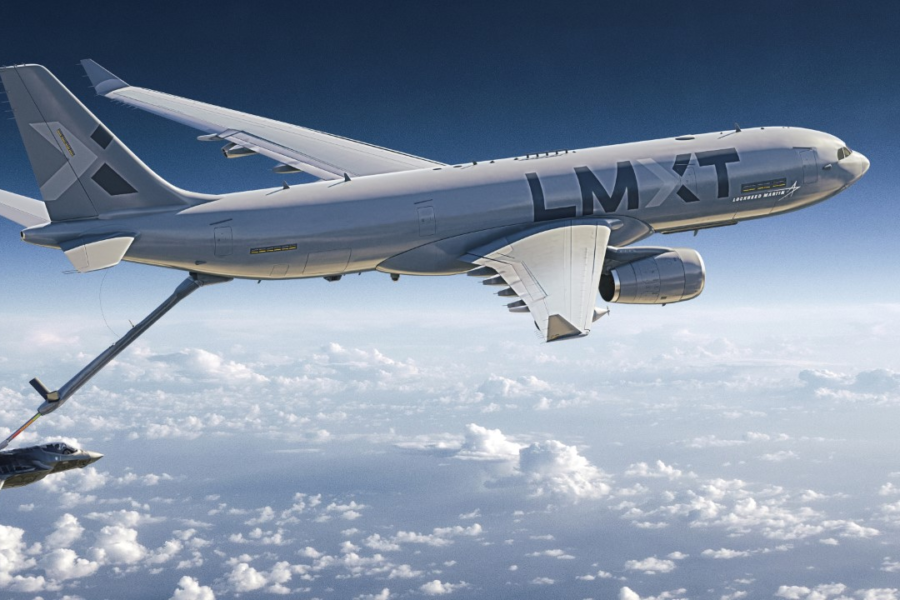 If Lockheed Martin wins the Air Force’s upcoming KC-Y tanker competition, the jets will be built in the U.S., in partnership with Airbus, at facilities in Alabama and Georgia, company LMXT director Larry Gallogly said Jan. 31.

“Green” Airbus A330 airliners would be assembled in Mobile, Ala., and then modified to a unique U.S. Air Force configuration of the Multi-Role Tanker Transport—already serving with 14 countries—at Lockheed’s L-10 building at its Marietta, Ga., plant, Gallogly told reporters on a conference call. The cavernous L-10 building hosted the C-5 Galaxy production line, and then the modification of the Galaxy fleet to the C-5M configuration, now complete.

Studies are underway to determine how much under-roof square footage would be needed to accommodate the A330 production effort in Mobile. No new construction is necessary at Marietta. Announcement ceremonies with the governors of both states took place during the day.

Lockheed announced the LMXT effort last September, and was leaning toward Mobile and Marietta as the build locations, but had not yet nailed down the particulars of construction at that time.

An undetermined number of initial KC-Y aircraft would be built as A330s at Toulouse, France and reconfigured outside Madrid, Spain, for military duty, Gallogly said. U.S. workers would train on the existing lines before the production enterprise is created in the U.S., to reduce the learning curve and get up to max production rate as quickly as possible. The two U.S. sites would build tankers only for the U.S. Air Force; international versions of the MRTT, including Canada’s, would still be built in Europe.

A total of about 1,300 jobs would be created across Alabama and Georgia, and Gallogly said the figure referred to “direct jobs” and isn’t inflated with “supply chain jobs or anything else.”

No “used” A330 airliners will be converted for the Air Force, as was done for Australia, Gallogly said: all the jets will be new-build. Converting used aircraft injects “a lot of uncertainty…in the process…when you open up a huge airplane,” he said.

“The customer wants uninterrupted recapitalization of their tanker fleet,” Gollogly reported, and assuming a win, Lockheed expects to begin delivering aircraft “in the 2029, 2030 timeframe.” He called that timeline “notional,” based on the company’s discussions with the Air Force and the service’s public requests for information so far. It takes two years to build an A330 and 18-24 months to convert one to an MRTT; Lockheed hopes, with rapid learning curve reductions, to quickly get down to 18 months for conversion at Marietta.

The Air Force is expected to issue a request for proposals about a year from now, in March, 2023, with an award in late 2024. The service wants between 140 to 160 KC-Y aircraft, which would complement the service’s KC-46 fleet and would replace most of the KC-135s still flying in the 2030s. The Air Force is not interested in a “clean sheet” or stealthy aircraft, and wants a non-developmental item, meaning the LMXT will compete with the KC-46, being the only large tankers in production. The jet will be “built in America, by Americans, for Americans,” and will comply with Buy American laws, Gollogly said.

Mobile was selected for the work because, Gallogly noted, Airbus made good on its promise in the last tanker competition to do airline work there, and the port in Mobile will make it easy to move large sections of the aircraft. There is also an established aerospace labor pool in the Mobile area. The Marietta facility has been a Lockheed production location for decades, with “an incredibly skilled workforce,” he said.

“We’re taking advantage of a highly capable, highly experienced” labor pool, he said. He said Lockheed claims a $8.3 billion economic impact across the two states, “with 24 facilities in Alabama, 22 throughout Georgia, and then all the supply chain jobs that go with it.”

While Lockheed will work to source as much content of the tanker as possible in the U.S., it recognizes that “there’s a very successful existing supply chain that supports the MRTT right now. So we don’t want to do anything that is going to increase the overall cost of the aircraft or induce any risk into our producing and performing with this aircraft.” He added, “This airplane has to work on day one.” Engines will be sourced from either Rolls Royce or GE Aviation in the U.S.

“There’s a lot of U.S. content on this aircraft already,” he added.

The LMXT would have an autonomous refueling capability, and by virtue of its large size, be able to go further with a larger load of fuel than the KC-46, Gallogly asserted. Two pallet stations on the MRTT’s lower level will be converted to fuel tanks to give the aircraft more offloadable fuel capacity, and the jet will be able to take off with all tanks full, he said. A large capacity is USAF’s “number one priority,” he said. “That’s the gap that needs to be filled…[and]…that’s what we have based our proposed configuration on.” The longer range and capacity is needed to multiply options in the Pacific theater, where distances are great, he said.  It will have “almost 10,000 nautical miles of unrefueled range.”

The jet will also have a “full” Joint All-Domain Command and Control suite, he said, as the Air Force expects the jet to be “out there all the time” and functioning as a communications platform as well as a tanker. The JADC2 suite the Air Force wants is “far more than…just hanging a pod on the wing but…a more robust communication node.”

The JADC2 suite and self-defense capabilities would make the LMXT different from the MRTT. Gollogly also said the existing MRTT boom system would be retained; again, to minimize disruptions and risk from creating a new one.

Gollogly said that a “very senior” USAF official asked told him if the boom, and vision system would be retained, and when Gollogly said they would, the senior official said, “‘Good. Don’t mess up the boom.’” Gollogly said the LMXT would be unusual in that the U.S. is used to being the leader on a new system, which international customers then modify for their own use. In this case, it’s “little backwards” in that the foreign partner is the leader, but he counted this as a benefit, because Airbus and its customers have already dealt with the MRTT’s “growing pains,” and “bumps in the road.” The jet is already certified to pass fuel to the F-35 and F-22.

“These will definitely not be ‘KC-X’ requirements,” Gollogly said, as those needs were determined “some time ago, in a very different geopolitical environment.”