Skip to content
Lockheed Martin’s Skunk Works released imagery of a notional crewed-uncrewed distributed team for air combat. The company said the image depicts an F-35 surrounded by “expendable, attritable and survivable” uncrewed aircraft. Without immediately confirming which was which, the company said the image shows a “Next Generation UAS,” which is a “survivable, persistent, multi-role” aircraft; the CMMT (Common Multi-Mission Truck), which is modular and expendable; and the TE-CAV (Tactical Expendable Combat Air Vehicle),” which is an air-launched weapon that can shoot its own dogfight missiles. Lockheed Martin illustration.
Expand Photo 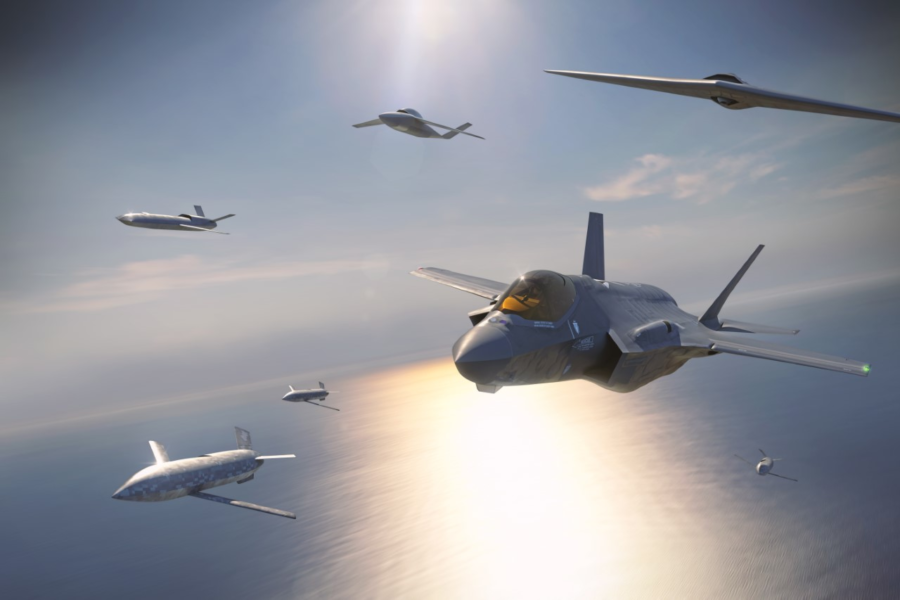 Teams of autonomous aircraft collaborating with a crewed airplane, in which each aircraft in the formation performs a unique mission on its own, is far more effective than the so-called “loyal wingman” approach, in which a piloted aircraft pairs with just one similarly-equipped, autonomous multimission aircraft—or so Lockheed Martin has concluded. It also found cost effectiveness in pairing expensive but survivable uncrewed systems with relatively cheap ones.

So said John Clark, the new head of Lockheed Martin’s Advanced Development Programs unit, or Skunk Works. Clark, who has had a career with the ADP unit in intelligence, surveillance, reconnaissance, and uncrewed aircraft, has been running the unit since April, when previous general manager Jeff Babione retired.

The concept is the same one the Air Force has been touting with its Next Generation Air Dominance program, which the service calls a “family” of systems that can collaboratively defeat a high-level adversary. The industry has come to refer to manned-unmanned teaming by the acronym MUM-T.

Lockheed Martin has applied its “pretty formidable operational analysis” capability to looking at many approaches to future air combat with an eye toward the “value proposition,” Clark said in a Zoom call with defense reporters.

The company concluded that pairing a high-end crewed aircraft with a number of uncrewed types “matched” to it in speed and stealth, along with a number of less costly or even expendable platforms, offers the most effective combination against a peer adversary’s air defenses, Clark said. He said the uncrewed aircraft work best in a “detached” way, in which they function independently, rather than in an “attached” way, in which they effectively depend on direction from the crewed airplane. The uncrewed aircraft need freedom of maneuver, he said.

The combination is a winner in the context of “the first 10 days” of a fight with a peer adversary, Clark said. “That’s where you’re going to make a difference.”

That period will also be the riskiest period of a war, and “these team members, that are uncrewed, we can take more risk with them … Being able to get better intelligence data, or, if we really need to take out an important command-and-control node in the adversary’s air capability, maybe these systems—even though they’re higher-end—they’re going to go on a one-way mission to ensure that system is taken out. And that unlocks a lot of other capabilities.”

The best results in the analysis were achieved “when you started to have a distributed team. And when that distributed team was operating each with their own unique roles,” Clark said.

He made an analogy to a disciplined soccer team spread out over a wide area moving the ball toward the goal, versus a team of youngsters all crowded around the ball. The latter draws defenders’ attention to where the ball is, he observed.

One “adjunct” of the team would be a highly stealthy platform that would fly ahead of the formation with four or so AIM-120 Advanced Medium-Range Air-to-Air Missiles (AMRAAMs) to shoot down defenders, Clark said. He described it as a “remote weapon station” for the manned aircraft, further back.

Clark said Air Force Secretary Frank Kendall “has started to expand on the CONOPS” for NGAD wherein “you actually have systems that are speed matched—they are signature matched” with the main, crewed airplane. “So the price point goes up … but you’re likely to get them back each time because they’re better equipped.” At the same time, “expendable” or “attritable” aircraft would also be part of the formation, low enough in cost that their loss or deliberate destruction wouldn’t be too onerous, he said. He drew a distinction between those terms, saying attritables are higher-cost than expendables.

“There’s an opportunity there” for saving money with expendable aircraft, he said, but they must be “survivability matched,” meaning that while they might not keep up with the fastest members of the formation, they won’t tip off the defenders about where to look for the rest of the team.

Another conclusion was that the human pilot in the formation shouldn’t have to do too much work to manage the other aircraft, as the pilot already has a “pretty heavy burden” dealing with the unfolding air battle. So the level of autonomy for the other aircraft must be high, Clark said.

Clark said Lockheed Martin is deep in evaluating what specific missions the collaborative aircraft should be performing, such as electronic warfare, suppression of enemy air defenses, and secure communications.

“In a basic” formation, he said, “you’re going to be looking at two to four of these adjunct systems.” But in defining what’s in the formation, “the challenge is, where do you draw the boundary, because there are multiple, interconnected nodes that are all collaborating with one another.”

Maybe, he said, “some of those systems are around NGAD, but maybe there are some systems that are farther ahead with IRSTs [infrared search-and-track devices] on it, and those IRSTs are providing information and cuing being pushed back” to the fleet, “or maybe they have small AMTI [air moving target indication] radars on them, providing an air picture flowing back to other systems carrying weapons and working in conjunction with NGAD.”

The boundaries of the distributed team “gets a little bit tricky,” Clark said, especially when satellites or surface vessels are also involved as sensing systems.

“We’re really looking at bigger than … the loyal wingman” concept, he said. “We have to capitalize on everything in JADO [joint all-domain operations] … to link these systems together and focus more on the data.”

Clark said munitions carried by the collaborative aircraft will have a big effect on the types of formations and the missions they’ll have, or whether they come back to be re-used.

“We have looked at” scenarios in which the uncrewed aircraft “actually ends with a bang, and we take advantage of everything it has up until that point.”

Everyone doing analysis of the future air battle comes to a common conclusion that “there’s not enough weapons close to the fight,” Clark said. The collaborative formation brings more weapons forward, he said, and “weapons are more effective” the closer they are to the target when launched. Less can go wrong—fewer get detected, shot down, or jammed or go off course—when that’s the case, he said.

Today’s fifth-generation aircraft have to carry their weapons internally to be stealthy, Clark said, and unmanned adjuncts could be an extra magazine. The fourth-generation F-15EX, though, will have to shoot from far short of the battle line “because their survivability is compromised,” forcing them to shoot more expensive standoff munitions, he said.

Autonomous adjuncts could be operational in “the next three [to] four years,” Clark said.

Because “expendables … have a lower price point … we’re looking at ways to get them out there much sooner, to have that option available … for our folks in the Pacific to have that tool in their toolbox, should they need it.”

In the medium term—“the early 2030s”—the rest of the concept could be fleshed out with operational craft, Clark said. It meshes well with USAF’s agile combat employment model, because uncrewed aircraft could operate from a variety of basing options.