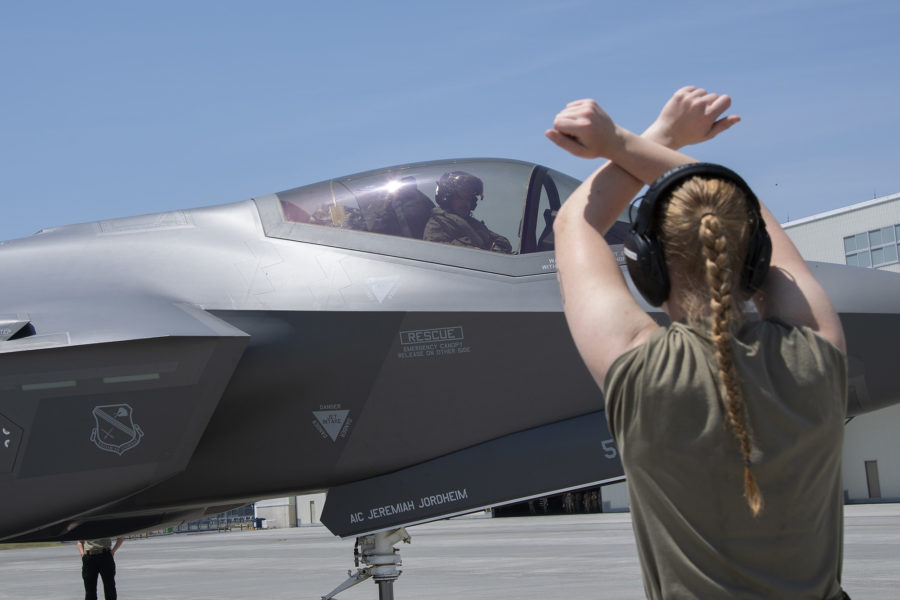 The Lockheed Martin-controlled portion of the F-35 cost per flying hour, across all users, has fallen 50 percent in the past seven years and should go down another 35 percent in the next five years, assuming a performance-based logistics contract is forthcoming, program officials said.

Lockheed Martin’s vice president for F-35 sustainment Audrey Brady, in a briefing for defense reporters at the company’s Arlington, Va., offices, said the cost reductions—which only affect “the things that we at Lockheed control”—are due to a number of factors. Some have to do with Lockheed Martin investment “at its own risk” of striking long-term deals with vendors for parts and materials to get economic quantities and better prices. Others have to do process or material improvements, lower costs for parts, faster repair times for parts, and quicker cure times for low-observable materials, in some cases reducing the “waiting time” for a repair by eight hours or more, among others.

The cost decreases do not take into account engine expenses, depot costs, or other maintenance, officials said, as these are contracted and budgeted separately. Lockheed Martin controls “about 40 percent” of the factors affecting maintenance costs on the jet. Thus, the total operating costs have not been reduced by the quoted percentages—only Lockheed Martin’s portion. However, Brady said the company’s initiatives have generated savings of $1.2 billion. Some of that has already been realized, and some “is still to be,” said Mike Aylward, company F-35 sustainment strategy director.

Measured by the Air Force’s new preferred metric of “cost per tail per year,” there’s been a reduction of 37 percent over the same 2015-2021 period, officials said, and it will decline another 25 percent through 2026. They did not supply dollar figures because those amounts are counted in fiscal 2012 dollars and can be “misleading,” Brady said, and are also “competition sensitive.” However, she said Lockheed Martin’s percentage decreases were calculated using “the same figures the F-35 JPO (Joint Program Office) uses.” Lockheed Martin is required to report those costs to the JPO on a monthly basis, she said.

Air Force Chief of Staff Gen. Charles Q. Brown Jr., in a streamed interview with the American Enterprise Institute Aug. 29, said operating costs on the F-35 are “something we are concerned about” and that the original estimates—made early in the two-decade-old program—had been “probably a bit optimistic.” He said the Air Force will be providing Congress “an updated” cost per tail per year in response to congressional demands for more insight into the program.

“We are starting to see some of that cost come down” as more aircraft enter the inventory, Brown said, and as the program achieves greater savings from volume. The metric of cost per tail per year is more useful to the Air Force than cost per flying hour because it gives the service a better handle on the “cost of ownership” of the airplane and budgeting, he said. He has previously explained that the per-flying-hour metric is misleading when the F-35 flies more hours than planned.

Lockheed has been pushing the services toward a performance-based logistics (PBL) contract for the F-35 fleet, in which the company would warrant a pre-set price for a certain number of operating hours, but Congress and the DOD have balked. Instead, the company is working toward two logistics contracts, Brady said: one for supply and the other “for everything else.”

Under language in the fiscal 2022 National Defense Authorization Act, a PBL can’t be awarded unless the performance achieved in fiscal 2022-2023 is better than has been achieved in previous years, Brady noted. If it is, a contract could be awarded “January 1, 2024,” she said.

Aylward showed a chart indicating that F-35 reliability has increased substantially in the last few lots of aircraft, thanks to more aircraft and parts being of a common configuration and parts being of better initial quality. In Low-Rate Initial Production Lots 11-13, mean time between failure of aircraft has been 11.1, 14.3. and 14. 1 hours, respectively, vice a requirement of 5.9 hours.

“More than 90 percent of our parts are performing better than expected,” Aylward said.