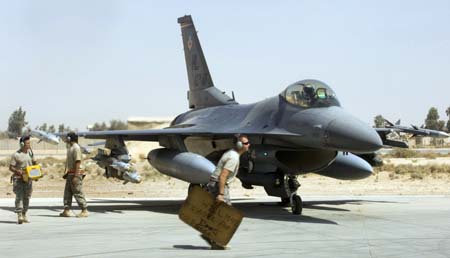 tic change, the Air Force wants to shed a large portion of its legacy fighter fleet in 2010 to save upwards of $3.4 billion that it could then apply to areas such as bomber modernization, intelligence-surveillance-reconnaissance expansion, and a greater focus on the nuclear mission. Based on press reports that cite internal Air Force budget planning documents for Fiscal 2010, the service is proposing retiring almost one-third of its F-15 air-superiority fighters and about 15 percent of its F-16s in 2010, years earlier than previously planned. If these cuts are sustained in the final version of the Pentagon’s Fiscal 2010 spending request to Congress, they represent a huge turn of events. Indeed, according to Air Force data current as of Aug. 31, the service had planned to retire only six F-15A/Bs and five F-16C/Ds in Fiscal 2010 when it presented Congress with its Fiscal 2009 five-year spending plan in February. Now it aims to phase out 137 F-15s and 177 F-16s, as well as nine A-10s in 2010, according to information first reported by Inside Defense.com (requires subscription). Air Force officials have said the service is working toward a smaller but more potent force, with the stealthy F-22 and F-35 representing the focus of the future fighter contingent. The emphasis is on investing in these future platforms to get as many on the ramp as soon as possible as opposed to diverting funds to keep the older legacy airframes going any longer than is absolutely necessary. The Air Force total inventory, as of Aug. 31, included 420 F-15 A-to-D models and 1,205 F-16C/Ds. The 44 F-15A/Bs in the fleet average nearly 31 years in age, while the 376 F-15C/Ds have a little more than 25 years under their belt on average. (The service also has 223 multirole F-15Es, the newest of the F-15 fleet.) All F-15 A-Ds, save seven, operate under some flight restrictions. And the seven that don’t are grounded, according to the Air Force data. The F-16s are nearly 19 years old on average. Twenty-two of them are grounded and another 13 operate under some flight restrictions. (For more, read this Reuters news wire service report and Wired’s report)