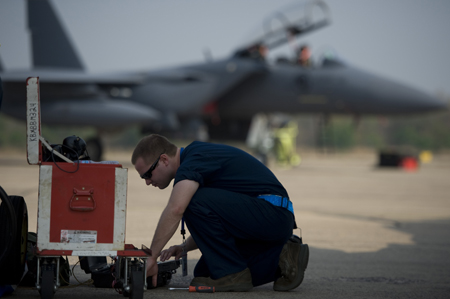 House on Thursday approved H.R. 933, full-year continuing appropriations legislation that includes funding for the Defense Department and other federal agencies for the rest of Fiscal 2013. House members approved the Senate-amended version of H.R. 933 by a vote of 318 to 109. The current budget continuing resolution funding government operations is set to expire on March 27, so the House’s action clears the way for President Obama to sign the new bill into law before then to avert a government shutdown. “This legislation provides funding for essential federal programs and services, helps maintain our national security, and takes a potential shutdown off the table,” said House Appropriations Committee Chairman Rep. Hal Rogers (R-Ky.) in a March 21 release. The Senate, for its part, cleared its version of the legislation on March 20 by a vote of 73 to 26. The bill includes some $518.1 billion in baseline defense funding, $87.2 billion for overseas contingency operations, and $10.6 billion for military construction. To help DOD dampen the shock of budget sequestration’s steep funding cuts across most defense accounts, H.R. 933, among its provisions, allows the Defense Secretary to transfer up to $4 billion across accounts, except for Milcon.