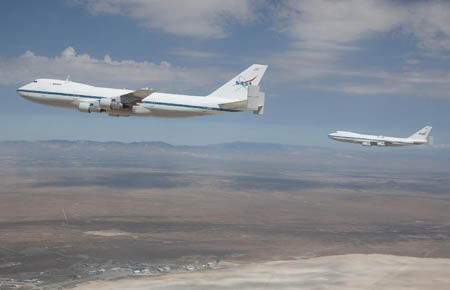 905, one of the space agency’s two modified Boeing 747 shuttle carrier aircraft, arrived Tuesday at Kennedy Space Center, Fla., for its final shuttle-related mission—ferrying the Space Shuttles Discovery, Endeavour, and Enterprise to their final resting places by fall. NASA technicians at Kennedy are preparing Discovery for the ferry flight early next week to the Smithsonian’s Udvar-Hazy Center at Dulles airport in Chantilly, Va. Swapping Discovery for Enterprise, the modified 747 is scheduled to fly later this month from Dulles on to JFK Airport, delivering Enterprise for display aboard the decommissioned carrier USS Intrepid in New York harbor. After a final hop planned in September to carry Endeavour from Cape Canaveral to Los Angeles for display, NASA 905 will assume a new role with the agency’s stratospheric observatory for infrared astronomy program, announced the space agency. NASA 911, the second SCA, transferred in February to support the SOFIA mission out of Palmdale Calif., joining the 747SP airborne telescope already used in this role. (SCA fact sheet)