Skip to content
Retired Lt. Col. Richard E. Cole, co-pilot to Jimmy Doolittle during the Doolittle Raid, smiles as he honors the U.S. flag during the singing of the national anthem at an airshow in Burnet, Texas. Cole was honored by the community and guests as the only remaining military service member alive from the April 18, 1942, Doolittle Raid. Air Force photo by Staff Sgt. Vernon Young Jr.
Expand Photo 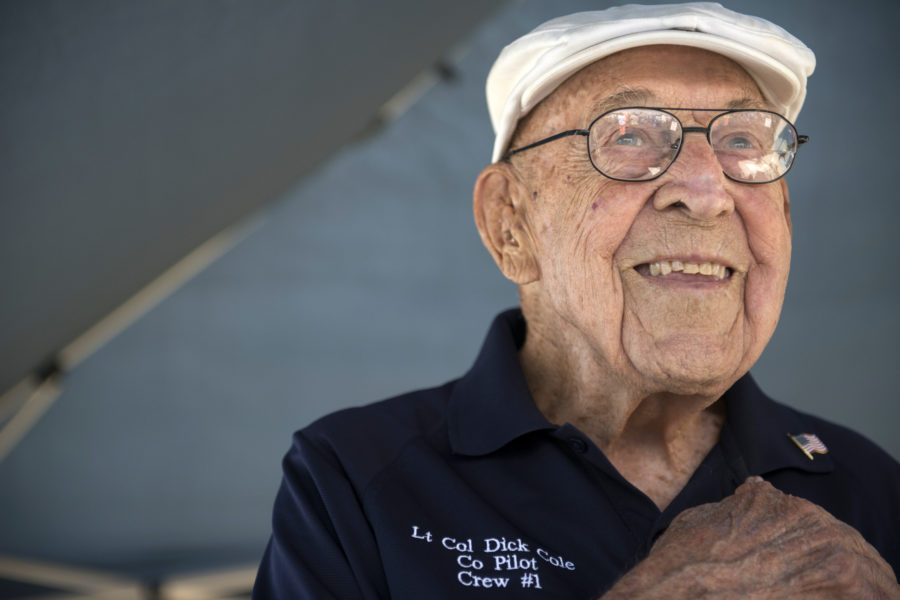 On the 80th anniversary of the Doolittle Raid against Japan, Air Force leaders performed the last “goblet” ceremony, bidding a formal farewell to the last of the Raiders, Lt. Col. Dick Cole, and honoring his fellow aircrew members.

Air Force Secretary Frank Kendall, at the Mattie Kelly Arts Center on the campus of Northwest Florida State College in Niceville, toasted the Doolittle Raiders, saying, “To those who have gone.” The Raiders trained for their historic mission in the area.

The April 18, 1942, mission, led by then-Lt. Col. Jimmy Doolittle, launched Army Air Forces B-25 Mitchell bombers from the USS Hornet aircraft carrier toward targets in Japan, mostly in the vicinity of Tokyo. Although the bombing attack inflicted minimal damage on the Japanese government and war industry, it proved a major morale boost to Americans, as it marked the first time the U.S. was able to strike back against the Japanese home islands after the attack on Pearl Harbor. It broke the Japanese military’s confidence that the home islands were impervious to attack and, according to Doolittle’s autobiography, “sowed doubt” in the minds of the Japanese that their military could protect them.

Of the 80 Raiders who took part in the mission, 72 made it home, and 61 survived the war, holding annual reunions from 1946. The Doolittle Tokyo Raiders Association created the “goblet ceremony,” where, at each annual reunion, survivors drank to fallen comrades from silver goblets bearing their names, while the goblets of those Raiders who had died the previous year were turned over and placed in a blue velvet box.

The last surviving Raider was Cole, Doolittle’s co-pilot, who died in 2019 at the age of 103. He raised the last toast to his comrades in 2017, unable to attend further ceremonies due to age and health. Cole built the box that houses the goblets.

The final goblet ceremony was deferred due to the COVID-19 pandemic and the desire to mark it on the 80th anniversary. Kendall drank the final toast to Cole and the other Raiders, along with Chief of Staff Gen. Charles Q. Brown Jr. and other senior leaders as well as members of the Doolittle Raiders’ families.

Cole attended the Air Force Association annual conference in 2016, when the new B-21 bomber was assigned the nickname “Raider” in honor of the members of the Doolittle mission. Upon Cole’s 2019 death, AFA president Lt. Gen. Bruce “Orville” Wright called him an “ambassador for airpower … up until the very last.”

The Raiders trained in secret for several months before the mission, learning how to coax their B-25s into the air with a minimum of takeoff space while carrying twice the B-25’s normal load of fuel. The aircraft were also modified in other ways, with much regular gear—including radios, guns, and Norden bombsights—removed to lighten the aircraft and extend their flight time.

The raid launched 10 hours ahead of schedule because the Navy detected a Japanese vessel that might have raised a warning. To preserve surprise, the mission launched 200 miles farther from Japan than the plan called for.

Doolittle and Cole had the toughest takeoff, as their bomber was first in line, with the shortest amount of deck space. Their technique was to reach the edge of the flight deck as the ship crested a swell, leaving more room to gain airspeed after departing the ship. A total of 16 B-25s departed the Hornet. The original plan called for the aircraft to land in China, but the early takeoff doomed most of them to crashes or water ditches. A sole airplane landed in Russia and was confiscated, its crew imprisoned until later in the war.

Though Doolittle feared a court-martial for losing all the aircraft under his command, the mission was deemed a great success, and Doolittle was advanced two steps, to brigadier general. He finished the war as a three-star general, having commanded the 8th Air Force in Europe, but was advanced by Congress to full four-star general rank in 1985.