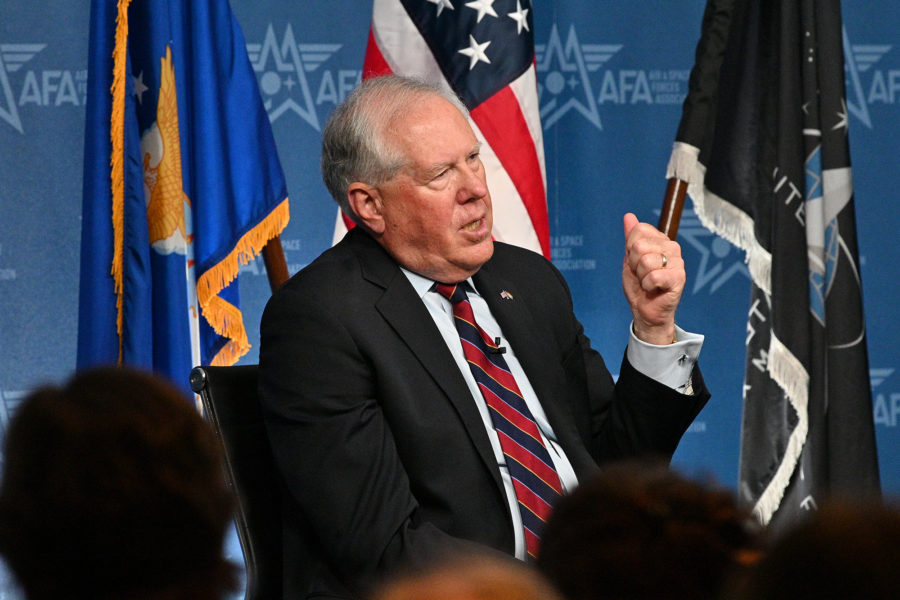 As Air Force Secretary Frank Kendall looks to modernize the force, he is calling for tough decisions that will shrink the size of the fleet and make the waging of two simultaneous wars “unrealistic,” he said at an AFA Leaders in Action event June 24.

Kendall sat down with AFA’s president, retired Lt. Gen. Bruce “Orville” Wright, for an in-person discussion attended by a hundred air power professionals and enthusiasts at the Air and Space Forces Association’s headquarters in Arlington, Va. Kendall addressed topics ranging from threats posed by China and Russia to the ongoing congressional funding decisions that he said are necessary to keep pace with China’s heavy technological investments.

“I think it’s quite frankly unrealistic to think that we can have a force that will fight two major wars at the same time,” he said. He also said he did not believe any nation was capable of immediately ramping up from a peacetime force to engage in a prolonged, conventional war.

Kendall demurred when asked how many combat squadrons the Air Force should maintain, but he was clear in his commitment to take on the risk of a smaller Air Force flying fewer hours in order to make big investments in the short term.

“The critical thing is to get to the next-generation capabilities as quickly as we can,” he said. “Do we maintain current capability, keep the platforms that we have, or do we shrink down a little bit in order to get to the future? I think those are the trade-offs that we’re going to have to face.”

The Air Force currently has 55 operational combat squadrons, 32 in the Active duty and 23 in the Guard or Reserve, according to a Heritage Foundation study. And according to data provided to Air Force Magazine by the Air Force, fighter pilot hours declined 16 percent from 2020 to 2021, to an average of just 6.8 hours per month per pilot.

Kendall said it would be “hard” to get pilot hours back up, but he still called the force “healthy.”

“We’ve got to think carefully about the balance,” he said. “We’ve got to do it in a way which maintains a healthy force, while we’re doing this, as well as keeps pace with the technological competition.”

To continue to deter and defeat adversaries, Kendall called for leveraging “integrated deterrence,” or the flexing of allies’ and partners’ military and non-military capabilities, while the U.S. catches up to China’s decades of heavy military investment.

Kendall has been pounding the pavement on Capitol Hill, he said, taking a classified threat briefing to the committees of Congress in order to help convince members of the importance of modernization over fleet size.

“Our average aircraft is 30 years old, and we have some aircraft that are not tailored to the high-end fight at all,” he said. “The people who manage and operate those aircraft do a fantastic job—I’m real proud of them. But we’re going to have to get to the next generation.”