Skip to content
Secretary of the Air Force Frank Kendall shares his vision with Airmen during a town hall at Joint Base Pearl Harbor-Hickam, Hawaii, Aug. 17, 2021. Kendall visited the base to meet Airmen and Guardians and discuss activities aimed at enhancing interoperability with allies and partners to ensure peace and stability throughout the Indo-Pacific. Air Force photo by Senior Airman Alan Ricker.
Expand Photo 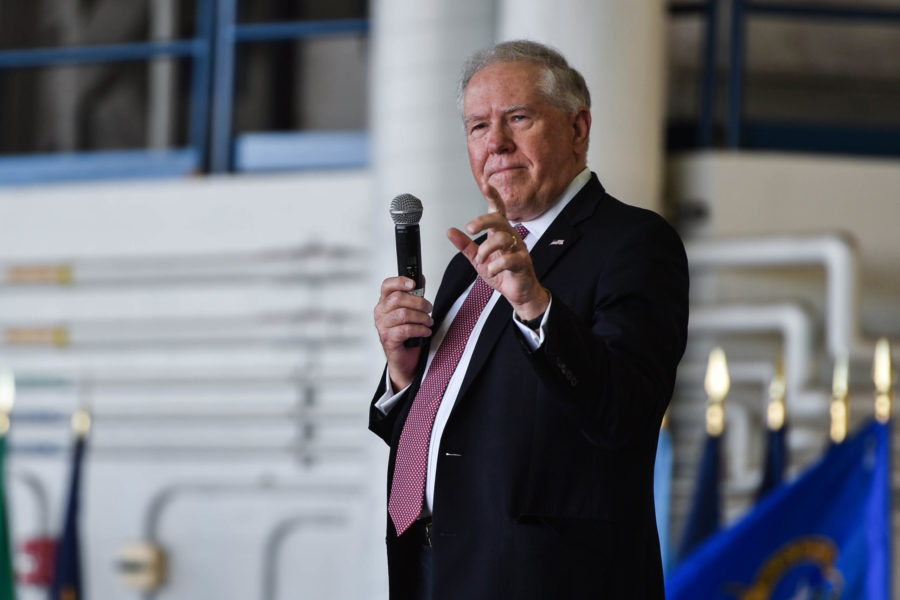 A record investment in research and development by the Department of the Air Force will help the United States win the long-term technology race with China, even while shrinking the fleet size before a possible mid-decade Taiwan contingency, Air Force Secretary Frank Kendall said May 17.

Recounting how China has “obsessed” him for years, Kendall said the “risk is going up as China continues to field more modern systems, and so we really have to focus on our future and take a little bit of risk in the process to do that,” Kendall said at National Defense University in response to a question from Air Force Magazine.

“The divestitures of programs are a way to find resources to invest in modernization,” Kendall added.

In the fiscal 2023, the Air Force proposes divesting 240 aircraft to afford $49.2 billion in research and development for the Air Force and Space Force.

“With the Air Force, Space Force, we need to transform two different sets of capabilities over time, and we need to do this as quickly as we can while maintaining a reasonable level of current capability,” the Secretary said before a crowd of several hundred service members, students, and China watchers gathered for the biennial China Aerospace Studies Institute conference.

Kendall downplayed a key theme debated by China aerospace experts throughout the day—that the People’s Liberation Army Air Force is readying for a mid-decade invasion of Taiwan.

“There’s no way to know when or if China might do something aggressive, but they’re preparing over time,” he said. “We’re trying to maintain a current capability that’s adequate while we get to better capability in the future.”

Kendall used a chess analogy to explain why the Department of the Air Force needs to invest heavily in the future to counter China.

Kendall added: “It is quite clear to me that we are in a race for technological superiority with China as far as conventional warfighting is concerned.”

“I seriously hope that our next conflict is not with China,” he told Air Force Magazine in a pull-aside interview. “The Chinese are catching up far more quickly than we had ever anticipated.”

Mulvaney cited hypersonics and quantum computing as “niche fields” in which China may be on par with the U.S. military. China’s system of government, he noted, allows for stable, long-term planning and funding of the military, even if its economy slows.

“We need to pick up our pace to make sure we maintain this advantage,” Mulvaney said, explaining that what took the U.S. military 30 or 40 years to develop, China has been able to achieve in 10 to 15 years. “They’re closing that gap, and we need to make sure that we continue to accelerate so that they don’t catch us.”

In his closing remarks, Kendall recalled a previous stint at the Pentagon, when after the first Gulf War, China observed the American way of warfighting and made investment changes. Upon returning to government, Kendall assessed how far the one-party state had come in tailoring its defenses to target a small number of high-value U.S. assets.

“We are the dominant military on the planet until you get to within about 1,000 miles of China, and then it starts to change,” he said. “The reason it starts to change is because of what China has invested in. They’ve gone after a suite of capabilities designed to deter or defeat us if we intervene in their part of the world.”

Kendall said that suite includes a host of anti-satellite capabilities and long-range precision weapons that can evade some defenses.

“They can reach out to try to keep our aircraft carriers away. They can attack our forward air bases, in particular, within the region,” he said.

“I think very much about how risk is increasing over time and the need to modernize in a way which gives us the capability we need, not just today, but tomorrow, the day after that, and the day after that,” Kendall explained. “And the cycle I’m interested in goes out decades.”