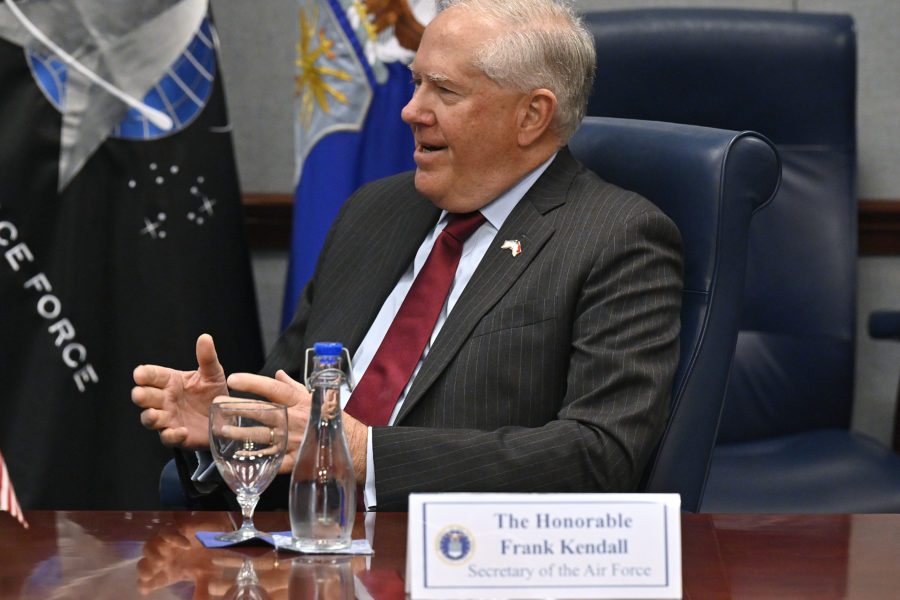 The Air Force won’t get larger anytime soon as a result of the new National Defense Strategy, and competition with China and Russia, though gravely serious, doesn’t constitute a new Cold War, Air Force Secretary Frank Kendall said at a defense conference.

“I do not expect major changes in force structure,” Kendall said at an Aviation Week defense conference in Washington, D.C. Rather, “What you should expect is major changes in … equipment and modernization.”

Kendall was responding to a question about what force structure changes would be driven by the new NDS, an unclassified version of which became public Oct. 27. The document did not offer any kind of a force-sizing construct that would establish how big any of the armed forces need to be, although the stated goal is for the U.S. to be able to defeat one peer adversary while deterring a second. Defense officials have said the appropriate size of the services will be determined through further analysis and the ongoing development of the Joint Warfighting Concept.

“We have to go through a transformation,” Kendall said. In the space domain, “my analogy is, imagine you have a Merchant Marine, and you woke up one day and discovered you needed a Navy. That’s essentially what the Space Force’s situation is.”

For the Air Force, “it’s really about getting on to the next-generation set of capabilities. It’s about transforming … to what we’re going to need for the future. So that’s kind of where we’re headed.”

There won’t be any “major changes … anytime soon” in numbers of fighter squadrons, Kendall said. The Air Force has dropped its stated requirement for 386 squadrons, unveiled in 2018 by former Secretary Heather Wilson, and service leaders now will not quote a new figure.

“We have a lot of commitments around the world, [and] we need a certain-sized force to meet them,” Kendall said, but he didn’t offer numbers.

“We are doing some divestitures. We’ll do more of those, to free up resources as we transition and modernize,” he said, suggesting the Air Force will actually get smaller in the near term.

However, “If I try to look down the road five, 10, 15 years, it’s possible to imagine a larger force structure.” But he said that will probably be a force in which manning levels are “fairly stable,” but the equipment “has been swapped out for next-generation equipment.” In his earlier remarks, Kendall noted that one of his seven operational imperatives is “uncrewed combat aircraft,” or up to five autonomous aircraft directed by and flying in formation with a single pilot in a fighter.

Future force structure will also depend “on a number of external factors,” Kendall said—a reference to how the U.S. might respond to the way adversaries size and use their own forces.

Kendall was asked if the Cold War is over, and whether a new one is taking its place.

While modern-day Russia “has influence over some small states, the states that comprised the Soviet Union are pretty much independent now.” The Ukraine war is Russia’s attempt “to reassert control” over some of its former territory.

“But it’s anything but cold” now, Kendall said, with a hot war raging in central Europe.

Unlike the Soviet Union, “Russia doesn’t have the economic clout to be the kind of threat” it once was, he said. “I think the current situation is very, very different … Russia is just not the same scale of threat.”

In the NDS, Russia is referred to as an “acute” threat, Kendall said, because “it still has a formidable military. It’s demonstrating a lot of shortfalls right now, but in the next few years, I would expect it to recover.” Also, “the propensity for aggression has been demonstrated pretty clearly … I don’t expect that to change anytime soon.”

Kendall said “We will see where all this takes us. But it’s not a Cold War situation” or a “continuation” of the Cold War.

Neither does he see the situation with China as a Cold War.

“It could become something like that,” he acknowledged, but the “fundamental reason” why it’s not is because China’s economy has become “intertwined” with that of the rest of the world.

“There is a lot of economic dependency between China, in particular, and its customers in the world and … its sources of raw materials, as well … So I think it would be harder to de-couple, economically, than during the Cold War,” when there were “two distinct spheres” of economic activity.

Also, China doesn’t seem to be pursuing “wars of national liberation” as the Soviet Union did during the Cold War. China’s military objectives, he said, are “more about control of things in their region, to be the hegemon there, if you will.”

He said China is also seeking to expand its influence around the world, such as through the “One Belt, One Road” construct, which, Kendall noted, “is not doing all that well.”

He thinks China sees itself “as the great power … essentially replacing the United States as the largest economy and the country with the greatest influence in the world. But not in the same sense as the Soviets were interested in wars of national liberation. It’s a different model.”

China is trying to export a governance model, though, he said, and it’s one of “state control … One-party, autocratic rule, which they think has led to their improvement in their living conditions” and a stable state.

It’s stable, he said, but “individual freedoms are not respected,” and dissent with the party in power isn’t tolerated. But “that’s their model, and they’re trying to push it.”

It’s “not impossible” that an economic “separation” could come about between the West and China and that it could spur a new Cold War, “but we’re not there now,” Kendall said. “And I think there are some pretty strong forces that, hopefully, will prevent that from happening.”