Skip to content
An artist's concept illustrates a Boeing F-15EX ﬂying in formation with four Boeing Airpower Teaming System aircraft, also known as the Ghost Bat. The modular aircraft are being developed in partnership with Australia and are expected to fly missions independently using artificial intelligence. Boeing illustration.
Expand Photo 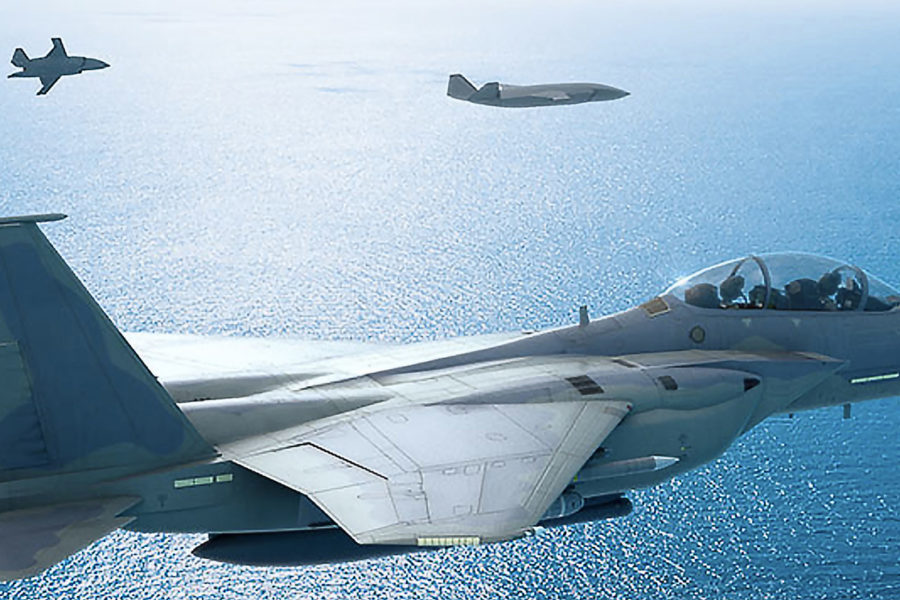 Air Force Secretary Frank Kendall indicated that the Air Force could incorporate the Australian-made Boeing MQ-28 Ghost Bat drone into the Next Generation Air Dominance (NGAD) family of systems, according to media reports. Citing China’s technological superiority and aggressive acts in the region, Kendall also said the U.S. may be willing to cooperate with Australia on long-range strike capability.

“I’m talking to my Australian counterparts in general about the NGAD family of systems and how they might be able to participate,” Kendall said about the Ghost Bat drone, formerly the “Loyal Wingman,” the first aircraft to be made in Australia in a half century.

Kendall told Breaking Defense that the United States and Australia are “having preliminary discussions” about buying the MQ-28 Ghost Bat “as a risk reduction mechanism” for NGAD’s drone capability.

“I think there’s a lot of mutual interest in working together. And we’re going to be sorting out the details over the next few weeks,” Kendall said after meeting with newly minted Royal Australian Air Force chief Air Marshal Robert Chipman on Aug. 22.

Australia and the United States, alongside the United Kingdom, deepened their defense relationship in 2021 when President Joe Biden announced the “AUKUS” partnership to share military technology, beginning with nuclear-powered submarines.

In public comments in Canberra, both Kendall and Chipman described China’s air superiority and aggressive actions, including a dangerous Chinese J-16 fighter intercept that damaged an Australian surveillance P-8 over the South China Sea. During the encounter, the Chinese aircraft ejected aluminum chaff that entered the P-8’s engines and damaged its exterior.

“They are as formidable a strategic opponent as I have seen. We are in what I consider to be a race for military technological superiority with the Chinese,” Kendall said, according to local media.

Chipman affirmed that China’s aggression would not deter his Air Force from flying over international airspace.

“That’s not only unprofessional. It’s definitely dangerous and unsafe,” Wilsbach said at PACAF headquarters at Joint Base Pearl Harbor-Hickam, Hawaii.

But China doesn’t see it that way.

China believes the airspace over the Taiwan Straits to be its sovereign territory in addition to swaths of airspace over the South and East China seas, where it claims waters in territorial disputes with the Philippines and Vietnam.

Kendall’s trip echoes an August two-week trip across Pacific air bases and meetings with allies and partners made by Air Force Chief of Staff Gen. Charles Q. Brown Jr. Kendall’s visit will not include visits to new partners but instead includes stops at Air Force bases in Guam and Alaska and air bases in Australia and Japan.

Kendall said China’s militarization of the South China Sea has implications for Australian national security. China has also signed a basing agreement with the Solomon Islands, east of Sydney, creating a new strategic dilemma for the U.S. ally.

In a September 2021 “2+2 meeting” between the U.S. Secretaries of State and Defense and their Australian counterparts in Washington, D.C., Australian defense minister Peter Dutton responded to a question from Air Force Magazine, saying the U.S. and Australian air forces would have “greater and more frequent engagement.”

In July, B-2s deployed to the Royal Australian Air Force Base Amberley for a bomber task force mission. In Canberra, Kendall signaled that the United States would be willing to cooperate with Australia, should it require an indigent long-range strike capability.

“If I saw you had a requirement for long-range strike [capability], then we’d be willing to have a conversation with [Australia] about that,” Kendall said, according to local media. The comments extended to potential joint development on the long-range B-21 stealth bomber.

“I don’t think that there’s any fundamental limitation on the areas in which we can cooperate,” Kendall added.