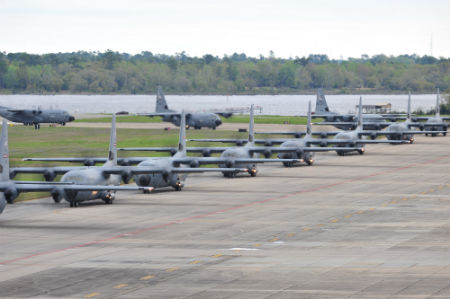 The 403rd Wing at Keesler AFB, Miss., launched and recovered a 16-ship operation for the first time in the wing’s history, according to an April 7 base release. Sixteen aircraft, including C-130Js from the Air Force Reserve’s 815th Airlift Squadron and its Active Associate the 345th AS, as well as WC-130Js from the 53rd Weather Reconnaissance Squadron participated in Operation Surge Capacity on April 5. The exercise was designed to coordinate between various squadrons, the Federal Aviation Administration, Stennis International Airport, and the Active Duty and reserve components, states the release. “The benefit of doing a large formation of this nature is twofold,” said Maj. William Miller, 815th AS chief of tactics and the mission commander for the operation. “One, you get all of the maintainers involved to do what they need to do to get all of theses planes generated and ready to fly. And, two, it provides experience for all of our aircrews to project combat power in a large formation, which is in the Army’s doctrine for us to be able to produce and execute.”