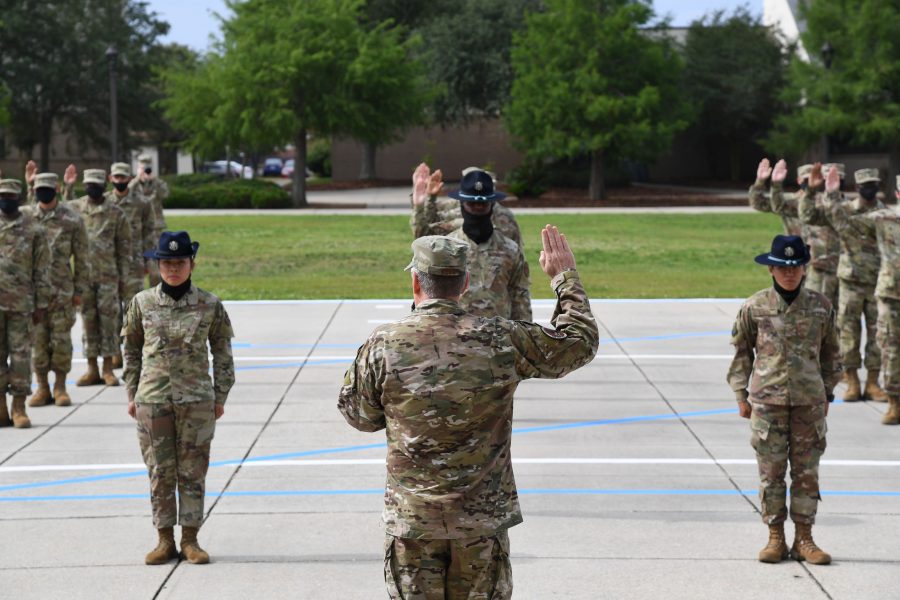 Nearly 60 Airmen from 37th Training Wing Detachment 5 graduated from Basic Military Training at Keesler Air Force Base, Miss., on May 15, according to an 81st Training Wing release. The graduation marked the end of a six-week proof of concept that looked to show that bases other than Joint Base San Antonio-Lackland, Texas, could host BMT if extenuating circumstances demanded it.

According to Air Education and Training Command spokesperson Jennifer Gonzalez, “officials are taking this week to evaluate BMT at Keesler and determine the way forward.”

During the May 15 ceremony, trainees donned matching black facial coverings and took their oaths while physically spaced apart from one another in keeping with social distancing guidelines, photos and video from the ceremony show.

Lt. Gen. Brad Webb, the head of Air Education and Training Command, and Chief Master Sgt. Julie Gudgel, AETC’s command chief, were both in attendance for the landmark event.

But while they might’ve trained in unparalleled times, Webb reminded the new crop of Airmen that they were more than the circumstances against which they were molded.

“COVID-19 may be a defining moment, but it doesn’t define who you are as an Airman,” he said. “These last few weeks at Keesler Air Force Base have defined that.”

The trainees’ time at Keesler showed that USAF “can fight through” the COVID-19 pandemic, “be flexible,” and accomplish the mission, Gudgel told the Airmen-to-be as she criss-crossed her way through their assembled ranks.

She also praised the Military Training Instructor corps for its role in making the proof of concept a success.

“Two months ago, [Lt.] Gen. Webb and [2nd Air Force Commander Maj.] Gen. [Andrea] Tullos sat a table at the 37th Training Wing, and said, ‘What can we do? What is possible?’” Gudgel told the MTIs who led the flight. “And what you’ve done here is you’ve taken the possible and you’ve brought it to Keesler Air Force Base, Miss. You brought it to Camp Shelby and our Army partners, and you created quality Airmen who are going to represent our Air Force.”

All of the Keesler-based graduates will stay at the base for technical training, the release stated.

The May 15 ceremony marked the first time a BMT class graduated from a location other than Lackland since 1968, the release noted. A 1966 meningitis outbreak prompted the Air Force to temporarily move parts of basic training to Amarillo Air Force Base, Texas, until the middle of 1968, Air Force Magazine previously reported.