Keeping BACN in the Diet 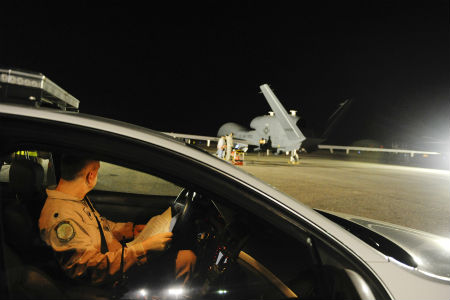 Air Force officials are working to integrate the contract-operated Battlefield Airborne Communications Node fleet as permanent Air Force assets, officials said. The mixed fleet of specially modified E-11A business jets and RQ-4B Global Hawks have provided beyond line-of-sight networking to keep ground troops in contact in the mountains of Afghanistan since 2009. The President’s Fiscal 2015 budget contains funding to keep BACN flying on a contract basis, but Air Combat Command officials are looking to make BACN a long-term program of record, according to a May 29 release. “We’re proud to provide that support and want to continue providing it as long as it’s needed,” said BACN deputy program manager Jennifer Gould. Manned E-11As recently surpassed 5,000 combat sorties in Southwest Asia while the EQ-4Bs set a monthly sortie record logging 30 flights in April, according to officials.