Japan Thanks United States for Support 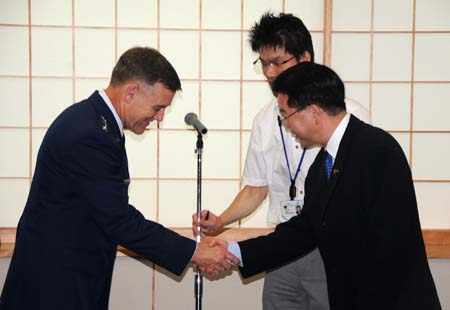 Ministry of Foreign Affairs thanked senior Air Force, Army, and Navy leaders for each service’s participation in Operation Tomodachi during a ceremony in Tokyo. “On behalf of the Japanese people, I would like to say thank you to all of you. Operation Tomodachi reminded us that Japan and the US are really good friends,” said Japan’s State Secretary for Foreign Affairs Yutaka Banno. Each of the 12 US military leaders present accepted a commemorative shield presented by the Japanese government at the June 30 ceremony. “[W]hen the tragedy happened, it was not only our honor, but our duty to try to be some small part of the recovery operation,” said Lt. Gen. Burton Field, US Forces Japan commander. During Tomodachi, more than 20,000 US military personnel and 460 aircraft supported relief efforts after a powerful earthquake and tsunami ravaged northeast Japan in March. (Yokota release by A1C Katrina R. Menchaca)