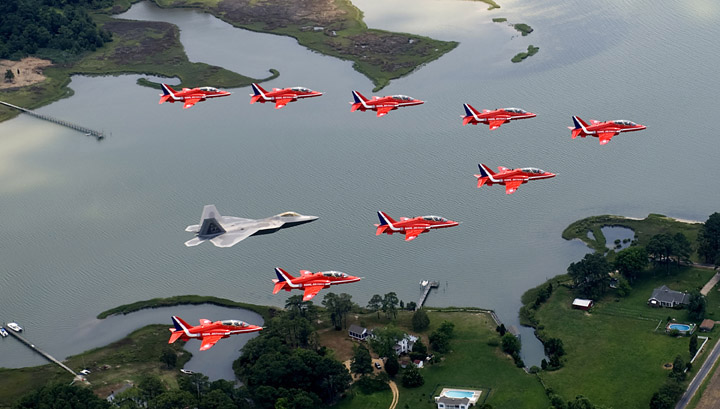 fighter will be appearing in the skies over Britain for the first time later this month, demonstrating its prowess at two air international shows. Tomorrow, three Raptors from the 1st Fighter Wing at Langley AFB, Va., along with members of the F-22 demonstration team will make the trek across the Atlantic Ocean for a week-long stint. On July 12 and July 13, Maj. Paul Moga, USAF’s first F-22 demonstration pilot, will treat visitors to a single-ship performance at the Royal International Air Tattoo at RAF Fairford in Gloucestershire, wing spokeswoman 2nd Lt. Georganne Schultz, told the Daily Report. On the following day, Moga will perform at the Farnborough International Air Show outside of London, Schultz said. The F-22s will head back to Langley on July 15, she said. The F-22 Demonstration Team is in its first full season. Last year was its debut year, but not a full season. Normally two aircraft would be sent for such a demonstration, with one serving as a backup. Schultz said, in this case, the decision was made to send three.