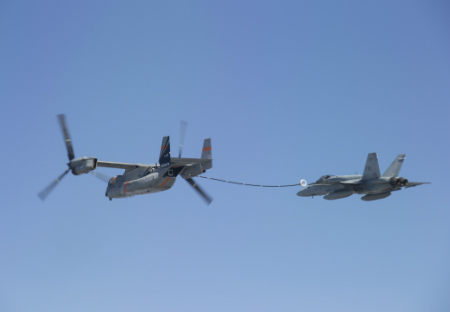 A V-22 completed an initial test in the role of an aerial refueling tanker, announced Bell Boeing. During the August demonstration over north Texas, a V-22 fitted with a prototype aerial refueling system safely deployed, held stable, and retracted a refueling drogue as an F/A-18C and an F/A-18D aircraft flew just behind and to the side of the V-22, according to the industry team’s Sept. 5 release. “Adding aerial refueling tanker capability to the V-22 will enable operators to execute a wider variety of missions with greater flexibility and autonomy,” said Vince Tobin, Bell Boeing V-22 program director. Bell Boeing said the test activities would incrementally build in scope until the V-22 demonstrates the ability to refuel a variety of aircraft in flight.