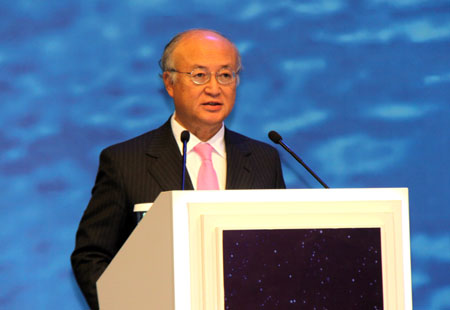 new report by the UN’s nuclear watchdog organization, the International Atomic Energy Agency, finds that Iran has continued developing technologies for nuclear weapons and the means to deliver them atop ballistic missiles, according to press reports citing diplomats and the document’s findings. The report, not yet publicly released, does not make clear exactly how far along Iran is in these activities, stated the press reports. IAEA Director General Yukiya Amano prepared the document, which the UN Security Council and IAEA’s Board of Governors received on Tuesday. The board will take up the report during its next meeting in Vienna beginning on Nov. 17, according to an IAEA release. Pentagon Press Secretary George Little said Wednesday the report apparently “affirms what we believed about Iran and the [its nuclear] program” and called on the Iranian government to “change their behavior and provide transparency” into their nuclear activities. White House Press Secretary Jay Carney declined to comment until the report is officially released. (AFPS report by Lisa Daniel) (See also BBC report, Bloomberg report, UK Guardian report, and New York Times report.)