Skip to content
Brig. Gen. Heath Collins, program executive officer for weapons and director of the Armament Directorate, addresses the small audience of Eglin Air Force Base leadership and Airmen by video recording due to COVID-19 restrictions during his assumption of leadership ceremony July 14 at Eglin Air Force Base, Fla. Air Force photo by Ilka Cole.
Expand Photo 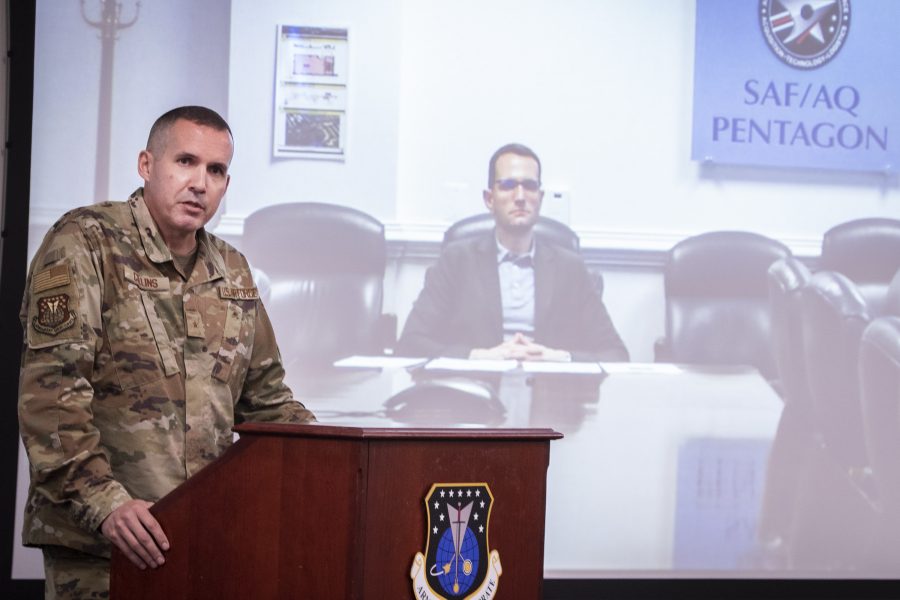 The service has discussed similar efforts underway in its hypersonic portfolio but has not yet named HACM as a central project. In July 2019, Aviation Week reported on the existence of two classified hypersonic programs that use the acronyms HACM and HCCW, but said the Air Force would not divulge information about either.

Speaking to Air Force Magazine in September, Collins said HACM and the Air-Launched Rapid-Response Weapon prototype are “really the two big tickets that we’re looking at from a warfighter focus.”

“We are the lead development office for the Air Force when it comes to hypersonic weapons,” Collins said Sept. 22. “The ARRW program is down here as well. We’re also in the midst of starting the new HACM hypersonic cruise missile.”

Air Force spokesperson Ilka Cole told Air Force Magazine in an Oct. 13 email that HACM differs from other hypersonic prototypes because it will use air-breathing engine technology for propulsion. An “air-breathing” cruise missile flies lower and over shorter distances than others because it needs to use air currents to keep moving.

In contrast, ARRW is a developmental boost-glide weapon that would be fired into the atmosphere and then use the energy from its rocket to fly toward its target.

Cruise missiles that can move five times the speed of sound or faster would make military attacks more unpredictable and offer a quicker long-range strike option. The U.S. already owns weapons that fly that quickly, but future hypersonic weapons are expected to maneuver more easily and stealthily in flight.

HACM is envisioned for use in conventional strike weapons on fighter and bomber aircraft, according to the Air Force Research Laboratory. It appears to be similar to, or the same as, a “solid rocket-boosted, air-breathing, hypersonic, conventional cruise missile” the Air Force solicited ideas for earlier this year.

The service has since started discussing a multi-mission, air-breathing missile dubbed “Mayhem” that would be larger than ARRW and could carry multiple types of payloads for airstrikes as well as missions like surveillance.

AFRL did not indicate whether HACM, the cruise missile described only as “Future Hypersonics Program” on a federal contracting website earlier this year, and Mayhem—officially called the “Expendable Hypersonic Air-Breathing Multi-Mission Demonstrator Program”—are the same effort.

The Air Force plans to hire Boeing, Lockheed Martin, and Raytheon to design a hypersonic cruise missile this fiscal year. Both the “Future Hypersonics Program” and the Mayhem program would reach their preliminary design reviews around the end of fiscal 2021.

When asked about upcoming short-term prototyping goals for HACM, Collins indicated it is too early in the acquisition process to start setting those dates: “There’s no real near-term milestone,” he said.

Cole said no other information is available on HACM, including when it could be ready for combat. She did not answer which companies AFRL is partnering with to build it.

Collins noted that ARRW is on track for a booster flight test before the end of 2020 and a full flight test next spring. That weapon has already flown in tests on the B-52.

“We’re in the planning phases to go from that prototyping demo into a production program and start putting capability out in the field,” Collins said.

The Air Force’s biggest hypersonics challenges are ensuring the defense industrial base has the resources to ramp up production when the military is ready, and figuring out how to adequately test weapons that move faster over longer distances than regular munitions, he added.

“This is a new market, a new industry, and right now, there’s a lot of fledgling [science-and-technology-type] companies that we’re working with very closely to transition into” production readiness, he said. “This is a unique skill set of people that you require for a hypersonics program that we continue to build and grow.”