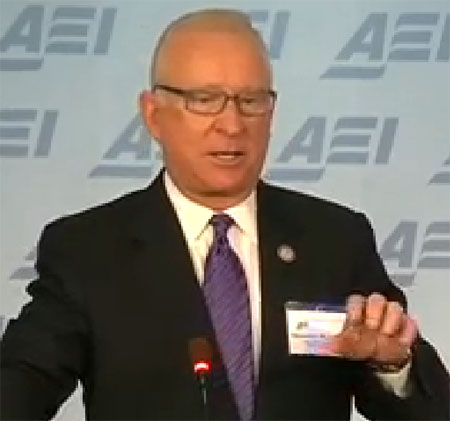 Air Force is flying “at the ragged edge.” The Marine Corps is not equipped to handle a contingency if it were to arise in the Pacific theater. And, the Army doesn’t even have enough resources to fulfill some of its “most basic needs,” warned Rep. Buck McKeon (R-Calif.), House Armed Services Committee chairman Monday. “These problems will rapidly intensify as projected budget cuts start to take their toll,” said McKeon during a speech at the American Enterprise Institute in Washington, D.C. “Even more dangerous is the sword that is hanging over the Congressional super committee,” he added. The newly formed committee has until Thanksgiving to come up with $1.2 trillion to $1.5 trillion in savings or an automatic cut will kick in that will decimate the US military, said McKeon. “Fifty percent of the mandatory cuts associated with the [automatic] trigger are from the Defense Department. Fifty percent. That’s a deeply unbalanced number with defense accounting for less than 20 percent of federal spending,” he said. “If enacted, the trigger would not just cut our military, it would close it for business.”