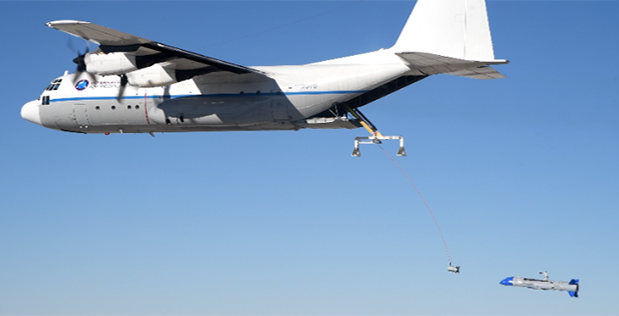 Gremlins Program Optimistic About Next Tests After Drones Fail to Dock

Dynetics and its partners are planning next steps for the Gremlins drone swarming program after the aircraft failed to dock with a C-130 in recent flight tests.

A third round of demonstrations began Oct. 28 at Dugway Proving Ground, Utah. Five Gremlins aircraft have flown for around 11 hours in total so far, including three drones that were airborne for seven hours in the recent tests.

Dynetics, a Leidos subsidiary, is the prime contractor on the program run by the Defense Advanced Research Projects Agency, which plans to hand the final product to the Air Force and other military customers. Kratos Defense and Security Solutions leads airframe production as part of that team.

“The first focus was really to demonstrate all the automated and manual safety behaviors that are needed to ensure the safe operation of the vehicle on the range and to avoid risks to the manned C-130 aircraft,” Tim Keeter, who manages the Gremlins team at Dynetics, told Air Force Magazine on Dec. 15. That’s given program officials confidence that the drones can fly safely.

The three X-61As individually tried out “rendezvous” and “station-keeping” maneuvers, about 125 feet away from the C-130. Then they crept to within 50 feet of the docking “bullet” that is designed to clamp onto the drone in midair. Over the course of nine tries, the aircraft came “within inches” of capture but fell short each time, Keeter said.

Several factors played into the tricky flight dynamics. The docking station extended from the C-130 swung like a pendulum as the Gremlins tried to connect. Communications between the C-130 and the drones could be delayed. How the various systems interact with the airflow can be hard to model as well.

Analysts will dig into data gleaned from the tests to figure out what fixes need to happen before the next tests. Updates will focus on “interplay between the aerodynamics involved on those final few feet, as well as in all the parts of our avionics and [air vehicle] system and our C-130 system,” Keeter said.

Some changes will come before future demonstrations. Others will be pushed to the long-term to-do list. Certain software changes might offer a bigger payoff, Keeter said, while other procedural tweaks can improve the number of times a Gremlin docks.

“All of our systems looked good during the ground tests, but the flight test is where you truly find how things work,” Scott Wierzbanowski, program manager for Gremlins in DARPA’s Tactical Technology Office, said in a Dec. 10 release. “It just wasn’t close enough to engage the recovery system.”

Collecting aircraft mid-flight will be a key step toward fielding deployable drone swarms, and the team is optimistic that it will see success next year. Researchers ultimately want to launch and recover four Gremlins aircraft within 30 minutes, as a stepping stone toward doing so with a dozen or more.

“It’s an engineering problem at this point,” Keeter said. “I think we’re going to accomplish it during our next test. We were hoping, certainly, to get there in November, but we’re not quite yet there. But we have a lot of data and a nice path forward that we’re working on getting to before the spring.”

The Gremlins team hasn’t yet set a date for the fourth round of tests. Dugway is packed with programs whose test schedules have been delayed by the coronavirus pandemic, and each is jockeying for a slot on the calendar, Keeter said.

The Gremlins program is one part of a broader effort to incorporate aircraft and weapons swarms into combat operations for coordinated attacks or intelligence, surveillance, and reconnaissance. The Air Force hopes that adopting small, easily replaceable unmanned systems will make it more resilient and offer more options on the battlefield.

Gremlins requested $12.1 million in fiscal 2020, but progress is taking longer than expected because of the pandemic. DARPA planned to wind down its part of the program and transition Gremlins to the armed forces in 2021, according to its latest budget request.

As the team moves from technology demonstrations to mission demos, the effort will involve a single person controlling multiple aircraft and various sensors at once. Dynetics eventually wants Gremlins to be able to loiter for one hour in a 300 nautical mile radius, and to carry a payload of more than 50 pounds in the nose cone.

“It’s compatible with the Air Force logistical infrastructure, and that includes the training,” Keeter added. “We’ve got draft technical orders, and all the things that will need to be done to move this into an operational system. So we believe we’re well-positioned for that step to begin working more closely with the different military stakeholders.”