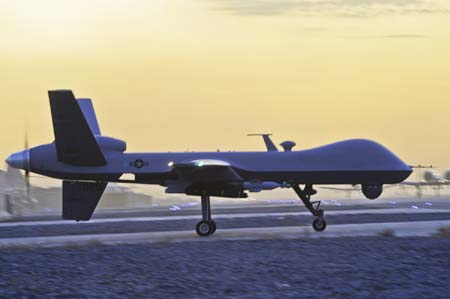 The Air Force is getting ready to field the Gorgon Stare airborne surveillance system. The new, podded system, which the service will mount on MQ-9 Reaper remotely piloted aircraft, will be introduced “this winter” into Afghanistan, reports the Washington Post. In its first increment, the Gorgon Stare pod features nine video cameras, each capable of providing a live overhead imagery stream of a different area of interest. That’s a vast improvement over the single-camera capability that Reapers have today. “If you look into the not-too-distant future, what these technologies will allow us to do is remove more and more ground forces and replace them with sensors where we normally would have to rely on people going somewhere to find something out,” explained retired Lt. Gen. David Deptula, former USAF intelligence-surveillance-reconnaissance chief, in the newspaper article. One challenge, however, is how to sort such massive quantities of imagery and provide actionable information from them. (See also Beyond CAP Fixation from the Daily Report archives)