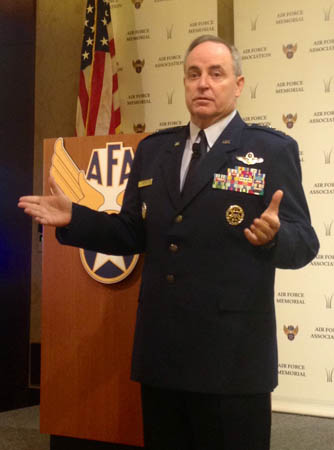 The furloughs of civilian employees starting in July will allow the Air Force to reconstitute a fraction of the readiness it has lost due to sequestration, Chief of Staff Gen. Mark Welsh said on June 17. He told attendees at an AFA-sponsored Air Force breakfast in Arlington, Va., that 33 squadrons have stood down due to sequester, and seven others have been maintained at “a basic mission capable rate…just takeoff and landing currency.” The furlough “savings” will allow USAF to get those seven squadrons “back up to combat mission readiness,” he said. Although Welsh said the furloughs are “a breach of faith” with civilian employees, who have received no pay raises for three years while their military counterparts have, he said “if you’re going to do a no-fly zone anywhere, you’re probably going to want your…suppression of enemy air defense aircraft ready to go,” and many of those have been “parked since April,” he said. “If you want options…in places like North Korea, Syria, etc., etc.,” then the readiness crisis must be fixed, Welsh said. But, “it’s ugly, right now,” and he reiterated that to the maintainers and pilots who are “looking out the window at their aircraft,” which are not flying, it “feels an awful lot like a hollow force.”