Skip to content
Retired Army Gen. Lloyd J. Austin III, shown during a 2010 visit with service members in Iraq on Thanksgiving, will be nominated to serve as the next Secretary of Defense. Defense Department photo by Sgt. Caleb Barrieau.
Expand Photo 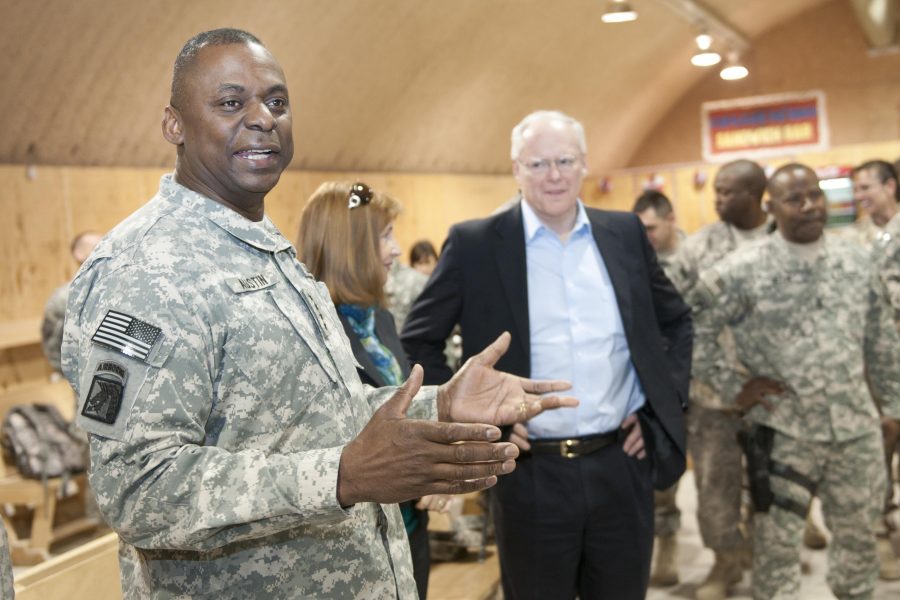 Former CENTCOM Boss Lloyd Austin to be Nominated for SECDEF

Austin, who left the military in 2016 as the four-star head of U.S. Central Command, would be the first-ever Black man to hold the Pentagon’s top civilian job if confirmed by the Senate. The milestone comes shortly after Gen. Charles Q. Brown Jr. took over as the first Black Air Force Chief of Staff, amid a reckoning on racial inequality in the military and society at large.

“With a distinguished record of military service spanning four decades, Secretary-designate Austin is a deeply experienced and highly decorated commander who has served with distinction in several of the Pentagon’s most crucial positions,” the transition team said in a release.

The former vice president got to know Austin during the Obama administration, praising his “exemplary leadership, character, and command” as a “trusted and crisis-tested” officer. Austin was the sixth African American to rise to four-star Army general, and the first to run U.S. Central Command, where he oversaw planning to take out the Islamic State group in Iraq and Syria.

“General Austin shares my profound belief that our nation is at its strongest when we lead not only by the example of our power, but by the power of our example,” Biden said. “I look forward to once again working closely with him as a trusted partner to lead our military with dignity and resolve, revitalize our alliances in the face of global threats, and ensure the safety and security of the American people.”

The President-elect penned an op-ed in The Atlantic to further explain his decision: “Austin’s many strengths and his intimate knowledge of the Department of Defense and our government are uniquely matched to the challenges and crises we face,” like handling coronavirus vaccine distribution logistics and supporting stretched-thin military members and their families.

He sits on the board of directors at defense giant Raytheon Technologies, steel manufacturer Nucor, health care services company Tenet Healthcare, and hospitality management firm Guest Services, Inc., according to his Raytheon biography. He is also a member of the board of trustees of the Carnegie Corporation of New York and Auburn University.

The announcement comes as a surprise to many in Washington who expected Michèle Flournoy, the co-founder and managing partner of WestExec Advisors as well as a former undersecretary of defense for policy, to be a shoo-in for the job. She would have been the first woman nominated to serve as Defense Secretary.

But groups like the Congressional Black Caucus reportedly pushed for more racial diversity among top cabinet positions, and Austin beat out Flournoy and other candidates like former Department of Homeland Security boss Jeh Johnson.

“This appointment reverberates throughout the history of military service and courage in United States Armed Forces,” the Congressional Black Caucus said in a release. “Black Americans have sacrificed their lives for this country in every war since the Revolutionary War. Appointing retired Gen. Lloyd Austin to a position of command and authority over the United States military, second only to the President of the United States, is historic and well-deserved.”

Flournoy congratulated Austin in her own statement, calling him “a man of deep integrity,” according to Defense News.

Because Austin left the military fewer than seven years ago, Congress will need to grant a waiver to let him serve as Defense Secretary, as it did for retired Marine Corps Gen. James N. Mattis in 2017. That lawmakers will be asked to do so again after just a few years has sparked questions about the American principle of civilian control of the military and the future of civilian-military relations.

Senate Armed Services Committee Ranking Member Sen. Jack Reed (D-R.I.), indicated he is open to supporting a waiver despite commenting in 2017 that it should happen “no more than once in a generation.”

“The burden of proof is on the administration. It also comes down ultimately to the quality of the nominee,” Reed told Politico. “Gen. Austin is an outstanding officer, and I think he should have an opportunity to talk about his vision for the Department of Defense, and that, I think, is the decisive factor.”

SASC Chairman Sen. Jim Inhofe (R-Okla.) also told the publication he’s never believed retired service members should have to wait seven years to be considered for the civilian job. “I would do it in a heartbeat,” he said of approving a waiver.

“General Austin should meet with the members of the House Armed Services Committee so they can ask questions about civilian control of the military, and to be assured that General Austin is committed to this important principle and understands what he will have to do to make sure it is upheld during his tenure as Secretary of Defense,” Smith said in a release.

If Congress consents to a waiver, and the Senate gives the green light for confirmation, Austin will take over as the Defense Department balances flat budgets against lofty modernization plans, and juggles the various priorities of U.S. involvement around the world.

Part of those responsibilities will be advocating for the Air Force and Space Force as part of broader military power.

“I have served with him on numerous occasions and I have the highest regard for him as a leader,” said Herbert “Hawk” Carlisle, president and chief executive officer of the National Defense Industrial Association. Carlisle served as the four-star head of Air Combat Command while Austin oversaw the airpower-heavy wars in the Middle East.

While Austin may look similar to Mattis on paper—with “lots of time on the ground in the Middle East” and ending at CENTCOM—they bring different personalities to the role, said Michael O’Hanlon, a senior defense fellow at the Brookings Institution.

He also pointed out that Austin faces a steep learning curve when it comes to the issues behind “great power competition,” the military’s current strategy for superiority over Russia, China, and other advanced militaries.

“Mattis was famous as a reader of military history and also spent a tour leading NATO’s transformation command,” O’Hanlon said. “Austin will have to work hard to get up to speed on China, Russia, and trends in technology. The bar is high.”