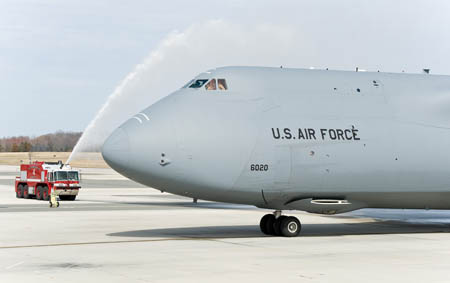 he 9th Airlift Squadron at Dover AFB, Del., became the first all-C-5M Super Galaxy squadron in the Air Force after flying its last C-5B sortie. The C-5B—aircraft No. 86-0020—arrived home to Dover on Monday from a mission to the Middle East. Water cannons from the base’s fire brigade ceremoniously sprayed down the aircraft as it taxied back to its parking slot for a final shutdown. The base “has largest aerial port on the East Coast; it [makes] sense to put the most capable, strategic airlifter right next to it, so that we can move more cargo faster,” said Lt. Col. Dave Herbison, 9th AS operations director, when discussing the new C-5M model. Upgraded with more efficient engines, a variety of reliability-enhancing modifications, and a glass cockpit, the Super Galaxy “allows us to do more things,” he added after the C-5B’s “fini” flight. The Air Force will convert aircraft 86-0020, like all other C-5Bs, to the Super Galaxy configuration. (Dover report by A1C Samuel Taylor)