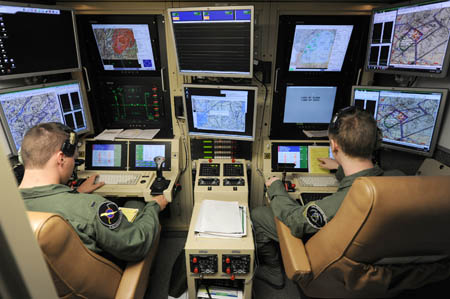 The first four Active Duty aircrew members recently graduated from the New York Air National Guard’s new formal training unit for the MQ-9 Reaper remotely piloted aircraft in Syracuse, home of the 174th Fighter Wing, according to a May 22 wing release. “The Syracuse FTU has been top notch from day one—easily the best learning environment I’ve experienced in the Air Force,” said one of the graduates, whom the wing did not identify in the release. The wing is the Air Guard’s first Reaper unit. Its schoolhouse will train Active Duty, Air Guard, Air Force Reserve, and foreign military MQ-9 pilots, teaching them how to transition from the MQ-1 Predator to the Reaper, said wing officials. Students undergo “an intense” 45 days of training, half of which is spent on ground training and half on flying MQ-9s over military ranges near Watertown, N.Y., or Creech AFB, Nev., they said. (Hancock Field report by Maj. Hans M. Poole)