Final F-4 Regenerated for Use as Aerial Target 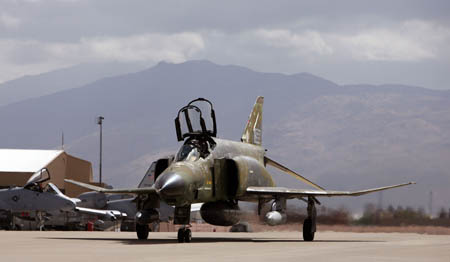 The final F-4 regenerated from storage in the Air Force’s aircraft boneyard at Davis-Monthan AFB, Ariz., earlier this month departed the base for Mojave, Calif., for conversion to a QF-4 target drone, announced base officials. This RF-4C airframe, dubbed “Last One,” left Davis-Monthan on April 17, states the base’s April 19 release. “It’s a great feeling to see such a magnificent aircraft fly again to serve the warfighter,” said Eddie Caro, the crew chief assigned to the aircraft since December 2012. BAE Systems will convert the platform into the QF-4 configuration in California and then deliver it to Tyndall AFB, Fla. This airframe arrived at Davis-Monthan for retirement in January 1989 and had been dormant until technicians with the base’s 309th Aerospace Maintenance and Regeneration Group last year began restoring it to flying status, according to the release. The Air Force is transitioning from the QF-4 to using QF-16s as its full-scale aerial targets. (Davis-Monthan report by Teresa Pittman) (See also Three-Hundredth QF-4 Delivered.)