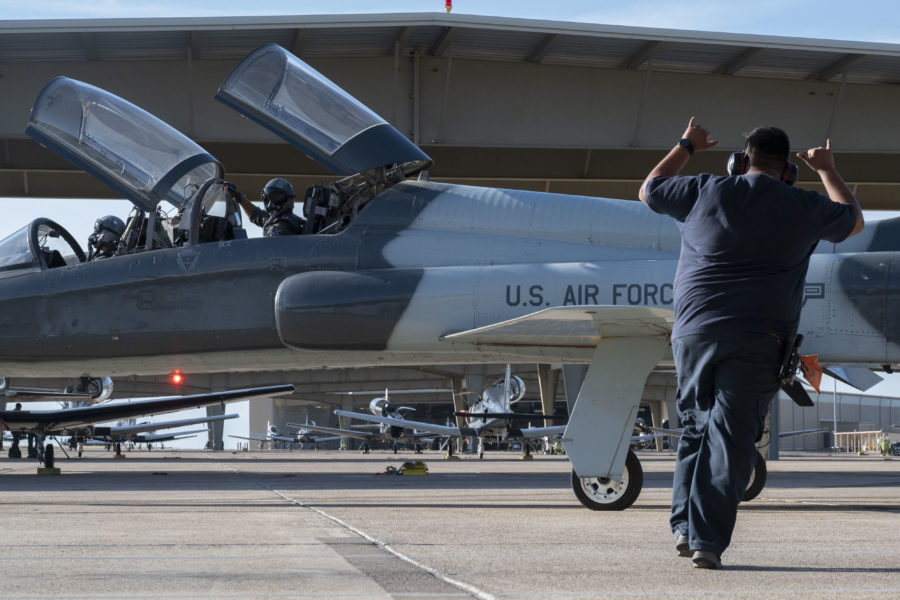 Concerns about potentially faulty ejection seat parts have prompted the Air Force to ground 279 trainer aircraft until inspections can be performed to assure that the aircraft are safe to fly. The grounding, which went into effect July 27, affects nearly half the T-38 fleet.

“We will not return aircraft affected by this issue to the flying schedule until we’re confident their escape systems are fully functional,” he said. “Our instructor pilots accomplish an incredibly important and demanding mission every day, and we owe them safe and reliable aircraft.”

The aircraft affected are spread among all USAF Undergraduate Pilot Training bases as well as Naval Air Station Pensacola, Fla. The grounding affects 40 percent of the T-38 fleet and 15 percent of the T-6 fleet. The T-6s are turboprop aircraft that teach basic flying skills, while the supersonic T-38 is used to prepare fighter and bomber pilots for their operational aircraft. The T-38 is also used to teach fighter fundamentals. The Air Force had 492 T-38A/C jets and 442 T-6s as of Sept. 30, 2021.

Air Force Materiel Command informed AETC that explosive charges used in the ejection seats of T-38s and T-6s may suffer from “quality defects,” which were not explained. Aircraft with the explosive cartridges installed must now be checked, and the procedure for that inspection is being developed in concert with AFMC. Each seat has multiple and redundant cartridges.

“AFMC was able to isolate the specific lot numbers of product that require inspection and further identify which aircraft may be affected,” according to the 19th Air Force statement. The paperwork indicated that the 279 trainers could have faulty parts.

“Those specific aircraft will remain under a temporary stand down until maintenance can confirm that the escape systems are fully functional,” 19th Air Force said.

Martin Baker makes the ejection seats used in the T-38 and T-6. Separately, the Navy has grounded some of its F/A-18s, EA-18s, T-45s, and F-5s with Martin Baker seats, also out of concern for defective cartridges.

Although all T-38s and T-6s stood down on July 27, those not believed to have the bad parts were back on the flying schedule July 28.

“As our teams investigate this further, if we find information that identifies other issues we will aggressively take steps to ensure flight safety, including temporarily standing down aircraft where required,” 19th Air Force said.

“Our primary concern is the safety of our Airmen and it is imperative that they have confidence in our equipment,” Wills said.

AETC officials said the command will likely shift to simulator training during the downtime while the potentially affected aircraft are being inspected.