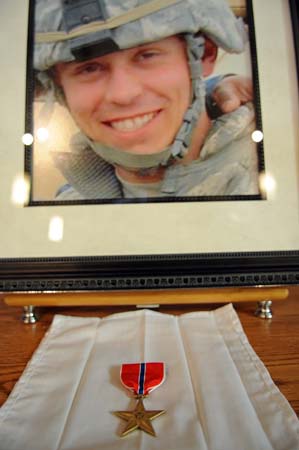 Jonathan A.V. Yelner, who was killed April 29 when his vehicle struck an improvised explosive device near Bagram AB, Afghanistan, was awarded a Bronze Star medal posthumously May 8 during a memorial service at Ellsworth AFB, S.D. He was a weapons load crew member assigned to Ellsworth’s 28th Aircraft Maintenance Squadron. “Senior Airman Yelner was a valiant warrior who sacrificed his life for a noble cause,” Col. Peter Castor, vice commander of Ellsworth’s 28th Bomb Wing, said at the ceremony. “He lived the Air Force core values and was a true leader to us all.” (Ellsworth report by A1C Abigail Klein)