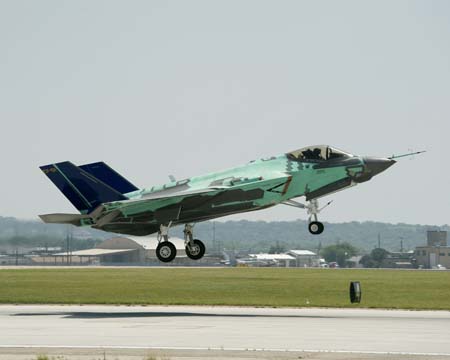 CF-1, the first Navy F-35C test aircraft, made its inaugural flight on Sunday from NAS-JRB Fort Worth, Tex., Lockheed Martin announced Monday. Company test pilot Jeff Knowles, a retired naval aviator, was at the controls for the 57-minute flight. “I am thrilled the F-35C has attained this milestone,” said Vice Adm. Thomas Kilcline, commander of Naval Air Forces, adding, “I look forward to the F-35C’s continued progress, and observing developmental flight testing at [NAS] Patuxent River [Md.], later this summer.” The F-35C variant is optimized for carrier operations. As such, it has a larger wing and control surfaces and additional structural strength than its Air Force F-35A and Marine Corps F-35B cousins. AF-1, the first weight-optimized F-35A airframe, first flew in November 2009. BF-1, the first short take-off, vertical landing F-35B test aircraft, took to the skies for the first time in June 2008.