Skip to content
An F-35A Lightning II fighter jet assigned to the 62nd Fighter Squadron at Luke Air Force Base, Arizona, takes off for a mission during Red Flag 21-2, at Nellis Air Force Base, Nevada, on March 9, 2021. Air Force photo by William R. Lewis.
Expand Photo 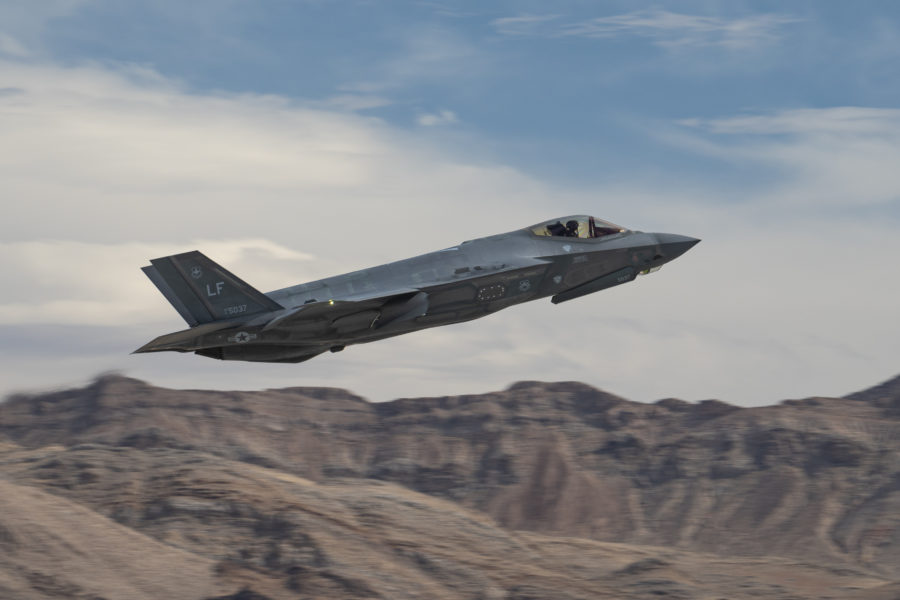 The Pentagon won’t declare the F-35 to have completed development for a few months more at least, but even when that happens and the program is declared ready for full-rate production, there won’t be a big jump in the jets coming off the production line, the program office reported.

“We’ll see an estimate” on when full-rate can be declared “in a couple of months,” said an F-35 Joint Program Office spokesperson who spoke to Air Force Magazine on background. But, she added, “I don’t know that there is a big surge [in production] associated with Lot 15,” which is the next lot being negotiated between the government and prime contractor Lockheed Martin.

The sticking point in declaring full-rate—known as Milestone C, which signifies the conclusion of development—continues to be integrating the F-35 with the Pentagon’s Joint Simulation Environment, she said. The JSE is a kind of wargaming system that determines the right mix of platforms and weapons for a war scenario, but it is dependent on dataponts such as maintenance turn rates and aircraft availability, which have been volatile over the six years the F-35 has been operating with the services.

“The amount of integration … of proprietary data … wasn’t clearly understood up-front,” the JPO spokesperson said. There’s now a team in the Office of the Secretary of Defense that is “evaluating all the necessary steps” to get that integration to occur, and “get it up and running to a satisfying place,” she said.

A new estimate for completion hasn’t been finalized. Once OSD gets it from the Naval Air Systems Command and the JPO, it will have to certify it as “a new baseline,” she said.

“It’s more complicated than originally anticipated,” she said. However, there is “more mature” data available on the F-35’s availability performance, so a solution is within sight.

Former Pentagon acquisition and sustainment czar Ellen Lord postponed the full-rate production for more than a year waiting on the F-35’s integration with the JSE. The inability to get the jet out of the engineering and manufacturing development phase has been seen by some as an opportunity to curtail the F-35 buy.

Lockheed F-35 Vice President Gregory M. Ulmer told reporters in February that the next three lots of F-35 production—15, 16, and 17—will collectively have “on the order of 100” fewer aircraft than the Lot 12, 13, and 14 deal. He didn’t say why production would slide, but original plans called for overall F-35 production—for U.S., partner, and foreign military sales customers—to continue ramping up to about 220 a year and plateauing there until the bulk of the jets going to the U.S. services were delivered.

The Air Force, which has requested 48 jets a year but was funded for 60 by Congress in the last few years, will not reach its goal of 1,763 F-35s until the early 2040s if it doesn’t substantially increase its buy rate. Chief of Staff Gen. Charles Q. Brown Jr. said at AFA’s virtual Aerospace Warfare Symposium last month that a production surge may be necessary.

While “production smoothing”—attaining an efficient production rate and sticking to it—is desirable to “make sure your curve is level and predictable for suppliers”—the U.S. services are rejiggering their F-35 plans, according to the JPO.

The services have “had to re-phase” their overall aircraft buying strategies, “or in some cases, they’ve decided they’d rather buy later and hold on for the Block 4 capability.” She added that “all the services are going to have to figure out how best to apply their scarce resources.”

The current configuration of the F-35 is the Block 3f. Block 4 will incorporate additional capabilities, made possible by the Tech Refresh 3, which cuts into the production line in Lot 15, now under negotiation. The TR3, as it’s known, incorporates more powerful processors and a larger display, among other improvements.

Air Force officials have said privately for the last two years that they prefer to buy bigger quantities of the Block 4, as it will obviate the need to retrofit a lot of jets with the earlier, “baseline” configuration.

“I don’t think you’ll see a large deviation” in production when full-rate is declared, she said. “When we finally cross the line on Milestone C, we’re not suddenly going to get additional manufacturing capability.”