F-22s Exercising in the Desert 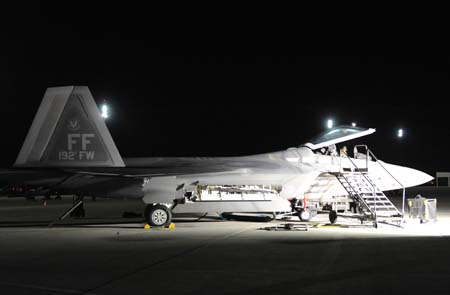 USAF not only sent its new F-22 Raptors to participate in the Dubai Air Show in the United Arab Emirates, but also sent six to participate in coalition training at UAE’s Air Warfare Center from Nov. 15 to Dec. 10. The six Raptors and an unknown number of airmen to operate and support them deployed from Langley AFB, Va., according to a Nov. 18 photo release. A Langley spokesman confirmed to the Daily Report that this marks the first time the F-22 has deployed to the Gulf Region for anything other than the air show earlier this month. Last spring, when he still headed 9th Air Force/Air Forces Central, Gen. Gary North (now commander of Pacific Air Forces) said he hoped to see F-22s training in the region soon because it would be a great opportunity for pilots and maintainers to “wring out” the new fighter in desert conditions. An AFCENT release notes that F-16s as well as F-22s are participating in Iron Falcon in the UAE.