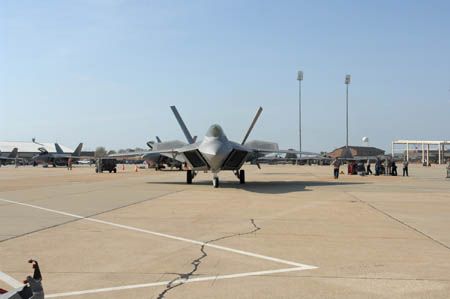 The Air Force Scientific Advisory Board, tasked with investigating the oxygen generation systems on the grounded F-22 fleet and other aircraft, is expected to release an interim report to Secretary Michael Donley and Chief of Staff Gen. Norton Schwartz this fall. Donley initiated the board, led by retired Gen. Gregory Martin, and ordered a safety standdown after Raptor pilots reported “in-flight, physiological events at a rate of three times higher than crews from other similar aircraft,” according to the release. “The Air Force takes flying-related incidents seriously. We met with leaders, operators, and maintainers in the F-22 community to talk about” the study, said Lt. Gen. Hawk Carlisle, USAF’s deputy chief of staff for operations, plans, and requirements. The board will examine technical data generated by flight test activities conducted at Edwards AFB, Calif., as well as tests conducted by the Air Force Research Laboratory and contractor personnel. Nothing has been ruled out yet. “We’re all in the same room and not holding back any effort to determine whether these events are related to hypoxia, air contaminants, or other factors,” said Lt. Col. Matthew Zuber, SAB executive director.