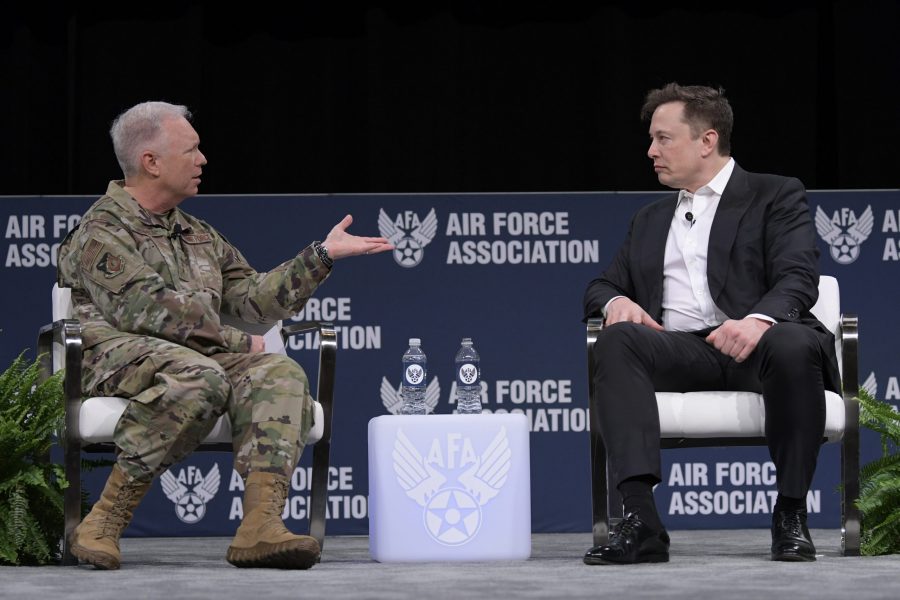 Musk, the serial entrepreneur and billionaire whose rockets take Pentagon sensors and satellites to space, believes drone warfare will define future combat while traditional manned fighter jets will fade in importance. Artificial intelligence, he added, has the potential to be the most transformative technology of the near future.

“The fighter jet era has passed,” he said, eliciting a murmur in the mostly Air Force crowd.

At the same time as a human in the cockpit may become less relevant on Earth, the business magnate argues that technological advancements in space will enable a greater role for humans beyond our atmosphere.

Musk said the creation of fully reusable launch vehicles will mark a profound shift in U.S. access to and leadership in space. He believes recyclable rockets and their mass production, as well as the technological advancements that follow, will help establish humans on the Moon and Mars.

“If the United States does not seek great innovations in space, it will be second in space,” Musk said. “It is a big deal.”

SpaceX’s Falcon 9 and Falcon Heavy rockets are partially reusable and helped drive the Air Force’s embrace of new launch vehicle designs in the National Security Space Launch program. The company is pitching Falcon Heavy to be one of two rockets used in the next phase of NSSL, and last year filed a lawsuit against the Air Force to protest contracts awarded to other contractors for development work related to the launch vehicle competition.

The next generation of space exploration and control won’t stop with NSSL, though.

“I think we can go a long way towards making Starfleet real and making these sort of utopian or semi-utopian futures real,” Musk said of the defense force in “Star Trek.” “It will definitely require radical innovation. One can’t get there by incrementally innovating expendable boosters.”

He wants to see more competition in rocket design, but the real challenge will be figuring out how to mass produce fully reusable rockets and other designs.

“At this point, I think designing a rocket is trivial,” he said of current designs. “Making even one of those things and getting it to orbit is hard. … The making of a production line that builds and launches many is extremely hard.”

Rapid and completely reusable systems will be even more difficult to build in bulk. SpaceX is building Starship, a spacecraft and rocket combination, to be a fully reusable crew and cargo transport system that can fly to Earth’s orbit and beyond.

Other than reusable rockets, Musk suggested the Department of the Air Force could invest in a revamped, unarmed intercontinental ballistic missile with a landing system that people could use to travel across the world faster than they would in an airplane.

“It’s sort of in the option package: uncheck ‘nuke,’ and then add landing system,” he said. “That’s definitely going to get you where you want to go the fastest.”