Skip to content
An F-35A Lightning II assigned to the 354th Fighter Wing taxis on the runway upon initial delivery to Eielson Air Force Base, Alaska, March 29, 2022. With the continued arrival of the F-35As at Eielson, Alaska is on track to become the most concentrated state for combat-coded, fifth-generation fighter aircraft. (U.S. Air Force photo by Airman 1st Class Jose Miguel T. Tamondong)
Expand Photo 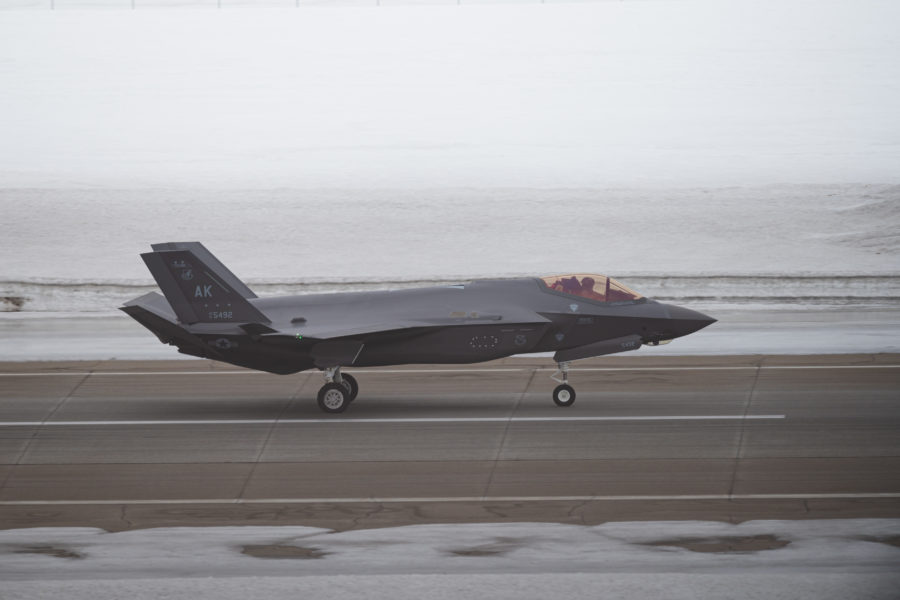 Eielson Days Away from Achieving Full Complement of F-35s

Once the beddown is complete, Eielson will have a total of 54 strike fighters in two squadrons. Eleventh Air Force Commander Lt. Gen. David A. Krumm told Air Force Magazine that when combined with the two squadrons of F-22s at Joint Base Elmendorf-Richardson, Alaska will have more operational fifth-generation assets than anywhere else in the world.

Krumm channeled Gen. William “Billy” Mitchell’s prescient 1935 comment to Congress: “Whoever holds Alaska will hold the world.” The line is drummed into every Airmen and Guardian assigned there, and it is often quoted by senior Air Force leaders. From the two major Air Force bases in Alaska, USAF fighters are within an eight-hour sortie to any place in the northern hemisphere, Krumm noted. And, the massive Joint Pacific Alaskan Range Complex, which is roughly the size of Indiana, also provides unique training space, allowing crews to “fully test out those fifth-generation capabilities,” he added.

“It’s a synergy of being able to organize, train, and equip in a place that few others can replicate along with the ability to then go to the sound of gunfire wherever we’re needed,” Krumm said. An F-35A Lightning II assigned to the 354th Fighter Wing lands on the runway upon initial delivery to Eielson Air Force Base, Alaska, March 29, 2022. With the continued arrival of the F-35As at Eielson, Alaska is on track to become the most concentrated state for combat-coded, fifth-generation fighter aircraft. U.S. Air Force photo by Airman 1st Class Jose Miguel T. Tamondong. An F-35A Lightning II assigned to the 354th Fighter Wing Lands at Eielson Air Force Base, Alaska, March 29, 2022. With the continued arrival of the F-35As at Eielson, Alaska is on track to become the most concentrated state for combat-coded, fifth-generation fighter aircraft. (U.S. Air Force photo by Airman 1st Class Elizabeth Schoubroek) Three F-35A Lightning II assigned to the 354th Fighter Wing taxi on the runway at Eielson Air Force Base, Alaska, March 29, 2022. With the continued arrival of the F-35As at Eielson, Alaska is on track to become the most concentrated state for combat-coded, fifth-generation fighter aircraft. (U.S. Air Force photo by Airman 1st Class Elizabeth Schoubroek) An F-35A Lightning II pilot assigned to the 354th Fighter Wing renders a squadron salute upon initial delivery to Eielson Air Force Base, Alaska, March 29, 2022. The 354th FW stood up two combat-coded F-35A squadrons, the 355th and the 356th Fighter Squadrons, and is slated to have a total of 54 F-35As by April 2022. (U.S. Air Force photo by Airman 1st Class Jose Miguel T. Tamondong)

Acclimating to the Arctic

The Air Force selected Eielson to be home to the first operational overseas F-35s in 2016 and the 354th Fighter Wing accepted the first two aircraft in April 2020.

“We’ve stood up our F-35s here an order of magnitude faster and more aggressively than any other F-35 base. And, we’ve done it at 50 below” zero, 354th FW commander Col. David J. Berkland told Air Force Magazine during a March visit to Eielson. “There’s a certain pride of doing things up here in the extreme Arctic environment” that motivates Airmen.

To prepare for the fighters, the Air Force spent $600 million on 39 military construction projects at Eielson, to include individual heated shelters to protect the aircraft and aircrew from the elements. With temperatures regularly dipping well below zero, aircraft parked outside won’t function properly, and maintainers can’t work on them outside most of the year without risk of frostbite. Berkland compared the shelters to a hospital operating room.

“Our maintainers take great pride in those facilities,” he said. “And with these airplanes being stealth, everything on them is just pristine. And the maintainers make sure it stays that way.”

Even after the last aircraft arrive, however, it will take some time before the service declares initial operational capability.

“The stand-up and the buildup, I would argue, is still definitely ongoing,” said Lt. Col. Samuel Chipman, commander of the 355th Fighter Squadron, which will receive the final two aircraft this month. “The F-35 community, if you look at it and compare it to the F-16 community or the A-10 community, has definitely not matured yet. There is not enough experience to go around … For instance, a lot of my guys are young captains. They are extremely motivated and extremely focused on what they do when it comes to the mission, [but] they are still extremely inexperienced.”

Chipman acknowledged the squadron’s 33-percent experience rate is “extremely low,” saying he’d love to have it above 50 percent, and preferably close to 75 percent. “It’s a little bit of a heavy lift right now, because we’re literally building both an F-35 squadron and [we’re] also building the F-35 community at the same time,” added Chipman, who served as the director of operations for the 356th Fighter Squadron as it was bedding down its Lightning IIs, before moving across the street to lead the 355th. “[The] good news is, they’re not conflicting with each other.”

He often tells his pilots, that if they can fly out of Eielson, which is located about 100 miles from the Arctic circle, they can fly anywhere in the world.

Learning to operate in such an environment takes practice, which is part part of the reason the wing’s operational tempo is so high. Berkland said the 354th Fighter Wing flies 44 F-35 training sorties a day, plus another 14 daily lines with its F-16 Aggressors. Both F-35 squadrons have already deployed with the jets: the 356th Fighter Squadron went to Exercise Cope North at Andersen Air Fore Base, Guam, in 2021, while the 355th recently returned from its own deployment to Guam.

“It’s awesome to be able to have that kind of communication, which is really key,” noted Chipman. “Although we’re separated by buildings and a roadway, we definitely … stay in touch and we make sure that lessons learned are getting passed.”