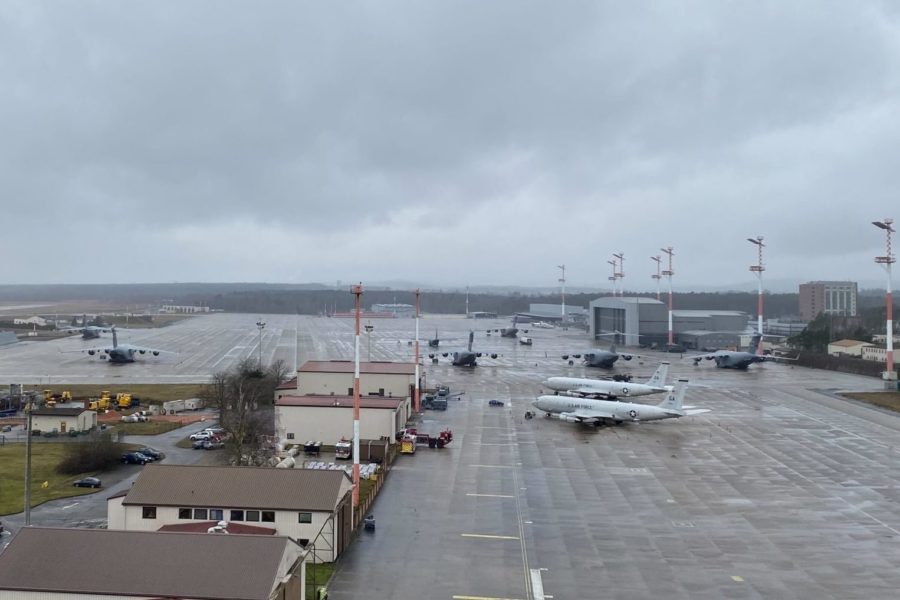 RAMSTEIN AIR BASE, Germany—Two E-8C Joint Surveillance Attack Radar System aircraft used for watching large swaths of terrain for ground vehicle movements have been seen at Ramstein Air Base, Germany. Ramstein is not a frequent operating location for the E-8C, and no exercise including JSTARS in the area has been announced.

A spokesperson for the 461st Air Control Wing at Robins Air Force Base, Ga., home of the JSTARS fleet, could not discuss E-8C movements or operational activity.

However, a February 2021 USAFE-AFAFRICA  story indicated that the platforms would participate in training exercises and events to demonstrate “U.S. commitment to NATO allies, enhance interoperability with multinational partners, and deter any actions that destabilize regional security.”

Asked about the presence of the aircraft Feb. 9, USAFE spokesperson Col. Robert A. Firman could not describe the jets’ specific mission but told Air Force Magazine “it is certain that we have more ISR than normal now.”

The aircraft were observed and filmed during a visit to Ramstein by Air Force Magazine on Feb. 4. U.S. European Command did not immediately respond to inquiries from Air Force Magazine asking why the E-8Cs were present at Ramstein.

“These missions demonstrate our continued commitment to safety and security in the region,” he added. “We will not comment on further operational details or possible future operations.”

The aircraft may have been operating out of Ramstein for some time. Publicly available flight tracking services noted a solo E-8C flight over the Donbas region of eastern Ukraine on Dec. 27 under the callsign Redeye 6. The same services tracked an RC-135V Rivet Joint, callsign Homer 19, operating in apparent conjunction with the E-8C in the same general area.

A fact sheet provided by the Air Force said the JSTARS can provide U.S. forces with “detailed battlefield information on ground forces,” which can be relayed “in near-real time to Army and Marine Corps common ground stations, and to other ground command, control, communications, computers, and intelligence, or C4I nodes.” Its radar can be angled to provide a 120-degree field of view “covering nearly 19,305 square miles,” and it is capable of detecting targets “at more than 250 kilometers.” USAF said the JSTARS has the ability to detect helicopters, rotating antennas, and “low, slow-moving aircraft.”

The JSTARS requires a flight crew of four and an operator complement of 18 (15 Air Force, three Army) persons to run and process the radar imagery it collects. NATO contemplated buying its own JSTARS in the early 2000s but opted instead for a small number of RQ-4D Allied Ground Surveillance unmanned aircraft.

The Air Force has 16 JSTARS left of an original 18-aircraft fleet. The service abandoned a plan to replace them with the Boeing 767-based E-10, which would have also eventually adopted the E-3 AWACS (Airborne Warning and Control System), but that program ended in 2007. The Air Force has subsequently indicated that, rather than replace JSTARS with a new aircraft, it prefers a networked system of sensors called the Advanced Battle Management System, which also will rely substantially on space sensors.

Congress has prevented the Air force from retiring JSTARS until the ABMS is operational, though the Air Force is anxious to retire the E-8C because the system was built on secondhand commercial 707s that suffer from a host of maintenance and “vanishing vendor” problems. The Air Force is moving ahead with re-engining plans after having previously dropped the effort when it announced the shift toward ABMS. New powerplants should aid in maintenance and availability, and provide more electrical power.

The 116th Air Control Wing, which operates the JSTARS, was the first “blended” wing in the service, putting Active-duty and Air National Guard Airmen in the same unit.

Editor’s Note: This story was updated at 3:05 p.m. on Feb. 10, with additional information from U.S. Air Forces in Europe.