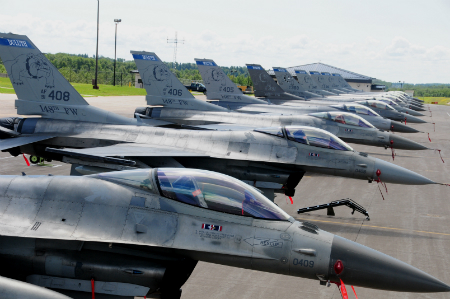 Amari AB, Estonia—Ten countries and some 4,700 personnel, including 475 US airmen, are participating in this year’s Saber Strike exercise in the Baltic countries of Latvia, Estonia, and Lithuania. This year’s exercise, which runs through June 20, includes eight F-16s from the Minnesota Air National Guard’s 148th Fighter Wing in Duluth. The fighters, which came directly from exercise Thracian Star in Bulgaria, are flying 10 to 12 sorties a day; they’re simultaneously supporting joint terminal attack controllers on the ground for Saber Strike and providing maritime support to US Navy ships operating in the Baltic Sea for NATO’s BALTOPS 2014, this year’s largest multinational maritime exercise in the area. “It is very busy supporting two different operations on two locations, but our maintenance people are doing a wonderful job being able to support the pilots, and the operational support people are doing a wonderful job planning,” 148th FW detachment commander Lt. Col. Nate Aysta told Air Force Magazine during a June 13 interview here, the F-16s’ staging location, located southwest of Estonia’s capital Tallinn. This marks the first time F-16s have participated in Saber Strike; typically A-10s have provided the ground-troop support. It’s also the first time Duluth’s F-16 Block 50 airplanes have operated in the European theater since the wing acquired them from Spangdahlem AB, Germany, in 2010.