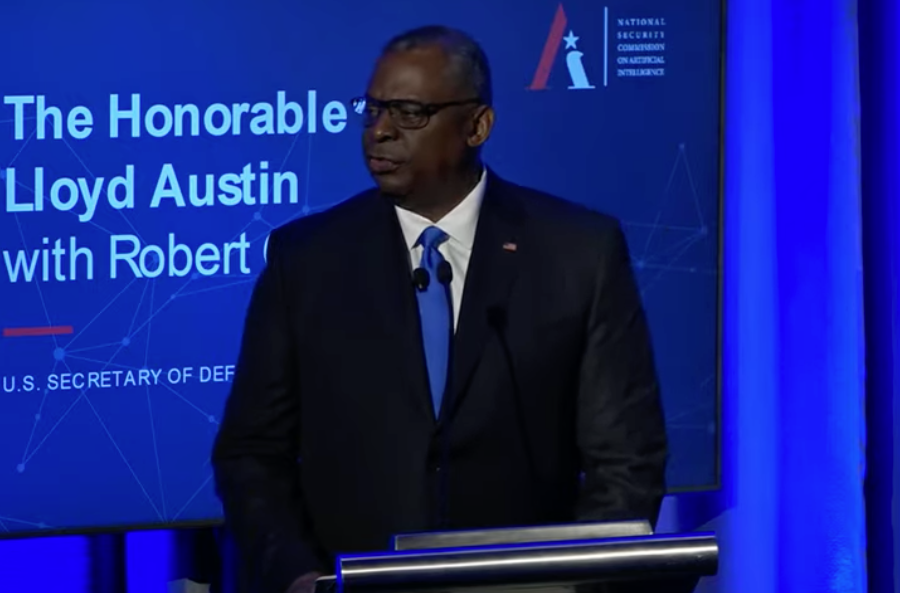 The Defense Department’s push to operationalize artificial intelligence, which leaders say will change the way the military conducts war but not the laws of war, is gaining momentum.

More than 600 AI efforts are in progress across the department, “significantly more than just a year ago,” Defense Secretary Lloyd J. Austin III told a live audience at The National Security Commission on Artificial Intelligence’s Global Emerging Technology Summit in Washington, D.C., on July 13. AI is “one of the top technology priorities” in the department’s $112 billion research, development, test, and evaluation budget request for 2021—the largest RDT&E request ever, he added.

“In today’s department, innovation cannot be an afterthought. It is the ballgame,” Austin said. “As President Biden has noted, we’re going to see more technological change in the next 10 years than we saw in the last 50. And we know that some of our competitors think that they see an opening, but we’re determined … to develop and dominate the products and technologies of the future.”

All the conference speakers, which included senior members of Congress and the U.S. national security team as well as leaders from India, Japan, Australia, South Korea, New Zealand, NATO, and the European Union, agreed that China is the pacing threat. China already has stated it intends to be globally dominant in AI by 2030.

Sen. Mark Warner (D-Va.), chair of the Senate Select Committee on Intelligence, opened the full-day conference with a stark warning: “China has reared a generation of innovative technologists, and let’s not underestimate the enormous skills and talents of the Chinese people,” he said. “In many areas, we’re now seeing Chinese competitors launch both products and new technologies in advance of all Western competitors.”

Warner said China is expanding its global influence by offering other authoritarian regimes a chance to monitor dissidents.

“China, I believe, is hoping to control the next generation of technological innovation and digital infrastructure and hopes to impose its values on those developments,” Warner said. “All of this again, I think, puts into question principles of transparency, accountability, sovereignty, [and] free, fair, and reciprocal relations.”

That’s why the Defense Department is focused on responsible artificial intelligence, which Austin said is the culmination of “cutting-edge technology” and “timeless values.” He emphasized that the U.S. will not choose between the two.

National Security Adviser Jake Sullivan agreed, saying the U.S. and its allies and partners need to “muster the will, the energy, and the resources to alter the course of the digital revolution.”

He outlined three waves to this revolution. The first was based on the premise that technology would favor democracy and human rights, while the second was the authoritarian counter to that revolution.

“So, the question before us today is whether we have the will and determination to usher in that third wave of this digital revolution—whether we can reboot and ensure that critical and emerging technologies work for, not against, our democracies and our security,” Sullivan said. “I believe that third wave is within our reach, if across party lines, across the public and private sectors, and across borders to allies and partners, we invest in our enduring advantages, we promote our shared values, we protect our technological ecosystem, and we mobilize and organize the rules of the road for the 21st century with our partners and allies.”

Austin said the Defense Department is “working with other like-minded friends to advance global norms grounded in our shared values,” noting DOD leaders meet several times a year with representatives from 15 allied and partner nations on the topic. He said he expects that number to “mushroom, going forward.”

Austin said artificial intelligence is a “transformative technology” that will require new processes, policies, and procedures. Last year, DOD adopted ethical principles for AI development and use and in June it announced the creation of the Rapid Defense Experimentation Reserve, which “helps us get promising tech across the so-called ‘Valley of Death’ and into new prototypes, capabilities, and concepts,” Austin said. The Department also recently launched a new AI and data acceleration initiative aimed at harnessing data at scale and speed.

“We’re going to compete to win, but we’re going to do it the right way. We’re not going to cut corners on safety, security, or ethics … We don’t believe for a minute that we have to sacrifice one for the other,” Austin said.