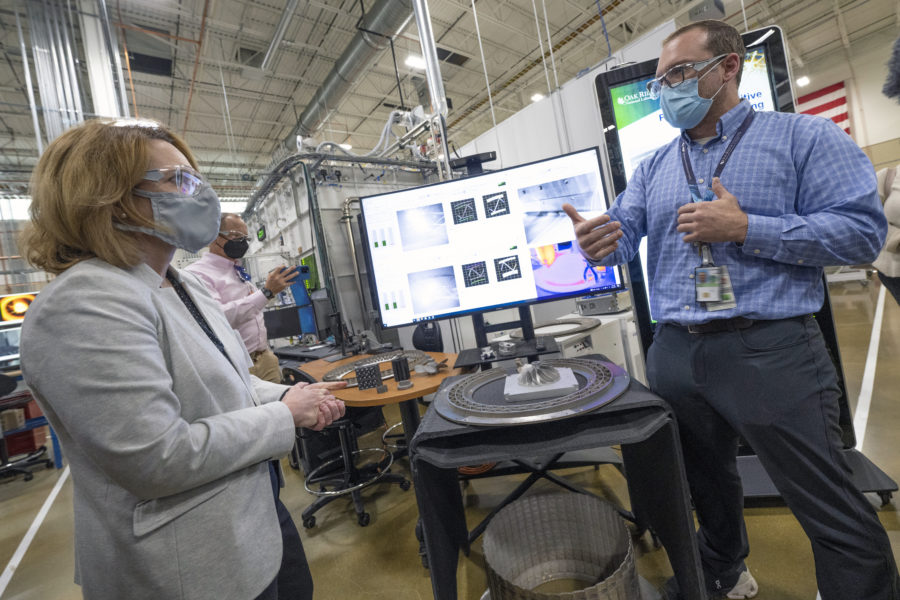 “Making sure that we can increase speed of decision—speed and quality of decision and action”—is Hicks’ top aim, an objective that covers “a lot of different organizational innovations and operational concepts that come together.” These include enterprise cloud capability, artificial intelligence, and the effective use of data. But it also includes improving the tech workforce.

In the Air Force, half of all billets requiring advanced academic degrees in science, technology, engineering, or math—STEM—are either vacant or filled by someone lacking the requisite qualifications.

Hicks said she and Defense Secretary Lloyd J. Austin III found it “pretty stunning” that the department lacked any “senior-level-focus set of processes or governance systems on workforce issues.”

The new Deputy’s Workforce Council set up in 2021, which she chairs, works with senior leaders “all across the department to look at workforce issues,” Hicks said. A new Innovation Steering Group, meanwhile, is connecting the “many wonderful flowers blooming on innovation across the department.” And a third group, “an innovation workforce tiger team,” is working on the intersection of the two to help get at “what you might call the innovation workforce—tech talent,” Hicks said.

Needs differ across the department, Hicks said. “Some organizations have a good sense of the tech talent that they need,” highlighting the research and engineering community as an example. “But there are other parts of the department where we don’t, and I’ll point to things like our data and AI work, where we really are starting to build from a much newer base of understanding … It’s going to take us a little time to work through those pieces, but it won’t take years. We’re aiming to … have a number of solutions to bring forward to Congress in their next legislative cycle.”

Tech talent and STEM education also concern the defense industrial base. According to DOD’s 2022 “State of the Space Industrial Base” report, China will outproduce the U.S. in STEM grads by 15 to 1 by 2030. The extent “of workforce issues threaten the viability of space domestically,” the report said, including “the ability to maintain a strong national security space posture.”

Space Force Maj. Gen. John M. Olson, the Department of the Air Force’s chief data and AI officer, was the lead writer on the study. He has assumed a hands-on role in cultivating the department’s tech workforce as a designated “champion” representing the University of Colorado Boulder in the Space Force’s University Partnership Program.

In a visit to the campus in April, he made clear the department’s interest in industrial innovation: “We want to buy commercial services as much as anything,” he said. “It’s a standard make-buy decision that any business would make. And if we can buy it from a rich commercial ecosystem, that’s even more wonderful for us because then we can focus our funding on those inherently governmental things.”

Olson, a reservist for a time, said that after working in the aerospace industry, he “came back to [full-time service] because we need people in government who know what EBITDA is.” The acronym stands for earnings before interest, taxes, depreciation, and amortization, and is a standard measure of corporate financial health. It’s important, he said, for the government to have people “who know what these things are from an industry perspective.”

Olson’s Ph.D. in industrial and systems engineering, coupled with a military background in acquisition, further illustrates one of Hicks’ points—that the talent pool in question isn’t limited to STEM: “People can frame it up under STEM, but it’s beyond STEM talent,” she said. “It also includes how we think about the acquisition workforce—those who are going out and trying to determine what we buy and how we buy it.”

Hicks sees the opportunities in government as being part of the draw, and she seemed to make that pitch to the collegiate attendees at DARPA’s conference.

“Whether you’re interested in the future of autonomous vehicles or powering the next generation of communications technologies or building resilience in the face of a warming planet, at DOD we’ve got something for practically everyone,” she said. “We have some of the most fantastic problems to solve, and our mission is second to none.

“It’s not only a chance to make a difference, it’s a chance to be part of something bigger than yourselves, to change the future for the better, to make the world safer for everyone.”