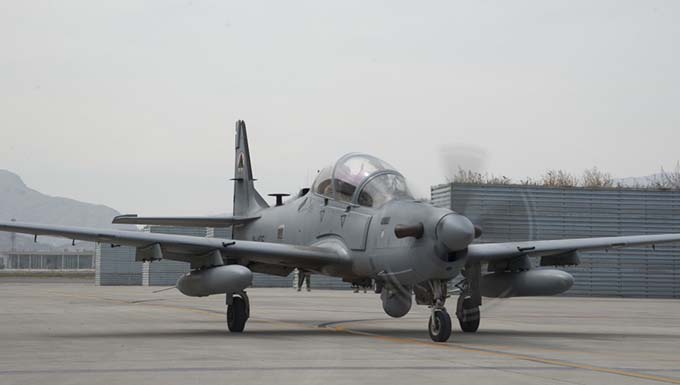 The Afghan Air Force has made major strides in its ability to plan and conduct operations, especially on its A-29 Super Tucano fleet, but it is overly reliant on contractor support to keep flying, according to a new Defense Department report on progress in Afghanistan.

The Afghan Air Force, alongside the country’s special forces, are the most capable components of Afghanistan’s military, the Pentagon said in a report to Congress released July 1. The AAF’s strike aircraft, which was “almost nothing” in 2014, now conducts nearly half of all airstrikes in the country, even as U.S. airstrikes have surged.

The AAF comprises three flight wings and 18 detachments, flying A-29s, C-208s, AC-208s, C-130s, Mi-17s, and MD-530s. The A-29 light attack aircraft is the backbone of strike operations, and has progressed in several ways, the report highlights.

For example, in September the first initial qualification training class is scheduled to take place inside Afghanistan. Until now, all Afghan pilots went through IQT at Moody Air Force Base, Ga. This training is scheduled to be fully operational by April 2021.

Operational A-29s are meeting an “insatiable desire” for precision munitions in combat, alongside rockets fired from the AC-208 Eliminator aircraft.

Within the past six months, the AAF’s Aircraft Maintenance Development Center trained more than 50 new pilots and copilots. This included two female pilots, one who flies the C-208 and one flying the AC-208—the first Afghan Air Force female combat attack pilot.

The report is not all good news for the Afghan Air Force, however. The nascent service still relies heavily on U.S.-provided contractor logistics support, including a complete reliance for parts supply and technical support. One hundred percent of C-130 and UH-60A maintenance is done by contractors, along with 80 percent for the MD-530 fleet and 70 percent for the A-29 fleet.

The only airframe the Afghan force does a majority of the maintenance on is the Russian-made Mi-17, with 95 percent of the wrench-turning done by Afghans. The AAF, however, has no ability to do a full overhaul of the aircraft, which is required every 2,000 hours, so the service is flying off the remaining hours as they transition to UH-60s, the report states.

The AAF has outlined three major problems with its maintenance enterprise—accountability, standardized procedures, and leadership—and has developed an “improvement plan” with the help of U.S. advisers.

“Building sustainability into this enterprise will take several months, but is a high interest item for [Train, Advise, Assist Command-Air] and the AAF,” the report states.