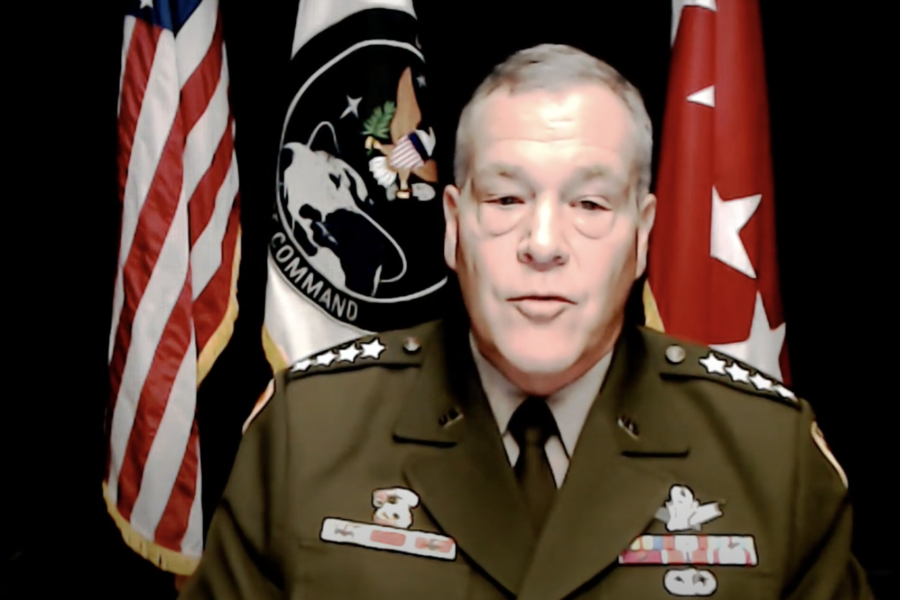 U.S. Space Command boss Army Gen. James H. Dickinson said his work is inseparable from that of U.S. Cyber Command but that policy must change to keep up with evolving threats in the cyber domain.

“Given our unique operating environment, there is a special synergy between U.S. Space Command and U.S. CYBERCOM,” Dickinson said July 27 in a virtual discussion hosted by the McCrary Institute and George Washington University’s Space Policy Institute.

“Securing one means securing the other. Operating in one requires operating in the other,” he explained. “That’s why our two combatant commands are so closely aligned—that’s why together they strengthen the backbone of U.S. and allied combat power.”

“That fact there lends one to believe that there is great synchronization between the two domains,” he said.

Dickinson said there is no effective U.S. military power without space and cyber.

“There’s no operating in space without cyber. There is no strategic-level cyber capability without space,” he emphasized.

The former chief of Army Space and Missile Defense Command compared the SPACECOM-CYBERCOM nexus with the role of the nuclear triad, deterring war while preparing to fight. In the space domain, he said the two commands would unite to fight a war that starts or extends into space.

“That fight will be a joint, combined, and partnered fight with U.S. Space Command and U.S. CYBERCOM in revolving, supporting, and supported roles,” he said.

Dickinson said that means sometimes SPACECOM provides capabilities to another combatant commander, and sometimes the command takes the lead.

“From a strategic perspective, it doesn’t matter where or even when those distinctions are made as much as it might at a tactical level at a given time,” he said.

A former senior Pentagon official in national security space told Air Force Magazine that the space and cyber domains are the most likely areas for a conflict with a great power adversary like China.

“Space and cyber are the two areas that I think are most likely to be maybe not flash points, but likely sort of areas where competition could first turn into conflict,” the former official said.

Space Force’s only acknowledged offensive weapon to counter satellites is an electronic warfare one. The Counter Communications System Block 10.2, or CCS, is owned and operated by SPACECOM.

The former official referred to the Defense Intelligence Agency’s 2019 “Challenges to Security in Space” report to discuss the continuum of threats posed by Russia and China from reversible to irreversible.

“Those are the same categories, the same way we would want to be thinking through it on the U.S. side,” the former official said. “Let’s have a range of capabilities from destructive to reversible.”

Dickinson said protecting the American way of life, which relies on space for everything from bank transactions to GPS, requires that America maintain “digital superiority.”

“We’ve got to be able to protect what’s important to us,” he said. “The global economy, all those things that tie into GPS, down to your everyday life, we have to look at how we protect that, how we protect that in a domain that is evolving and changing and adapting.”

The combatant commander said keeping up will require policy to change.

“Policy lags the pace of technology,” Dickinson said. “The problem, though, is that [the] gulf between the theory and the practice is often wide, especially in the space and cyber domains.”