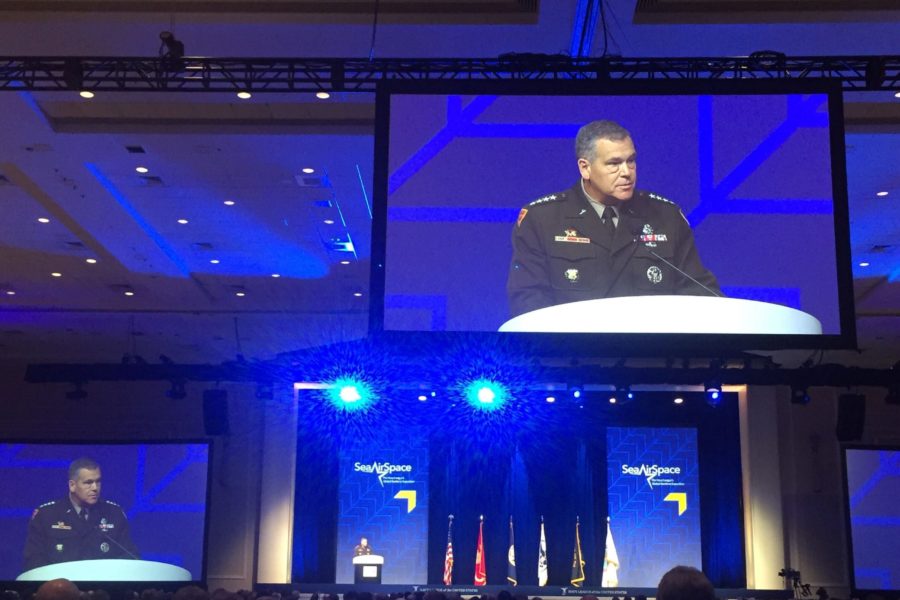 “The behavior of some of our adversaries in space may surprise you,” Dickinson said Aug. 3 during the Navy League of the United States’ annual Sea-Air-Space Exposition in National Harbor, Md. “If similar actions have been taken in other domains, they’d likely be considered provocative, aggressive, or maybe even irresponsible.”

With an area of responsibility that extends hundreds of thousands of miles into space, Dickinson narrowed his focus on a region in space where gravitational forces cancel each other. The so-called Lagrange points between the Earth and the moon are “strategically vital waystations” where spacecraft can remain indefinitely using a small amount of fuel, he said.

“A maritime analog to Lagrange points would be the strategic importance of several very small islands in the Pacific,” Dickinson said.

But unlike maritime treaties that bind nations to predictable behaviors at sea, the space domain does not have the same set of rules, and adversaries are violating safe standoff distances and behaviors, he said.

In recent years, China fired a land-based missile at a dead satellite, destroying it and leaving thousands of pieces to orbit the Earth. Russia, too, tested a space-based capability to align with the orbit of an American spy satellite, requiring the satellite to expend fuel to maneuver away. The Russian “nesting doll” Kosmos 2543 satellite had previously tested a capability to fire a projectile in space.

The implications are profound for the satellite communications, position-navigation-and-timing, and missile warning systems.

“As more actors come to space, the domain is changing, with an increased risk of collisions as well as of miscalculations or misunderstandings,” the memo read.

“My hope is that we are on a glide path to soon have some independent international agreement that would support that,” Dickinson said.

The SPACECOM commander also called for the U.S. to have a “position of strength” that could pressure adversaries to adhere to norms, much in the same way the Navy does in the Pacific.

“The protection of our space assets, I think we can agree in this room, is critical,” the commander said. “We don’t have centuries, or even decades, to get to the same level of agreement.”