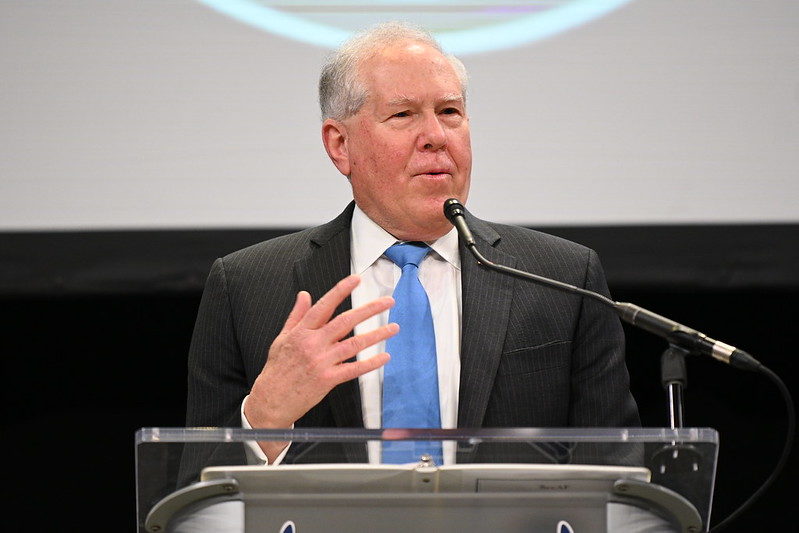 The Air Force’s “4+1” fighter plan is still intact despite Secretary Frank Kendall’s new “imperative” to develop a fighter-like unmanned airplane, and the Air Force is well into developing a concept of operations for a new unmanned long-range bomber that might be attritable, if the price is right.

The 4+1 plan—a roadmap for fighters that includes the Next Generation Air Dominance system, the F-35, the F-15EX, and the F-16, with the A-10 as the “plus one”—“is still valid … as part of near-term plans, … even mid-term plans,” Kendall told reports at the AFA Warfare Symposium. That’s because “it’s early … to commit” to uncrewed combat aircraft of the scope he’s contemplating.

In his keynote speech, Kendall said the NGAD system “will include a crewed platform teamed with a much less expensive, autonomous, uncrewed combat aircraft employing a distributed, tailorable mix of sensors, weapons, and other mission equipment.” It will “very much be” a “system of systems” approach for air-to-air combat, he said.

The unmanned bomber, on the other hand, is “more speculative.” There’s “more work to do” to flesh the idea out, he said. He clarified that the aircraft he has in mind isn’t necessarily an unmanned version of the B-21, which was “designed with an option to be unmanned.” But it could be.

The unmanned bomber is to have “comparable range” to that of the B-21, with a “payload to be determined,” but it must be “operationally valuable and cost effective.” It might accompany the B-21, he said.

The new bomber is in “concept definition,” he said. He maintained that it is a classified project, and while it will be “acknowledged,” not many details will be forthcoming. It will likely get underway with funding in the fiscal 2024 budget, he said.

The new aircraft would not substitute for any of the 120 or so B-21s now contemplated, Kendall said. It would be “additive” to the planned bomber fleet, but he specifically declined to discuss any numbers.

“How exactly those programs will transition hasn’t been sorted out, yet,” he added. “But obviously, they’re part of the overall picture we were looking at when we decided to move in this direction.”

In his keynote speech, Kendall said he’s looking for an unmanned bomber concept that would be half the cost of the B-21 and told reporters later, “I’d love to have it be less than half. I’d love to have it be a quarter or an eighth.” But half is “the minimum we should shoot for at this point.” It’s crucial that the Air Force “reduce the unit cost of the aircraft in the inventory” because, he asserted, all the manned aircraft on the books aren’t affordable in the numbers needed.

It wasn’t a “detailed analysis” that led him to the half-cost figure, Kendall said, but “I have an awful lot of experience with weapon systems and their cost.”

The B-21 will be the “mainstay” of the bomber fleet, Kendall predicted, offering cautious optimism that the program is doing “reasonably well” and that “we may end up buying more than we’ve currently planned.”

The Air Force “is going to need perhaps more long-range capability … at some point in the future,” he said.

Randall Walden, head of the Rapid Capabilities Office that is developing the B-21, told Air Force Magazine the unmanned bomber has to “match” the B-21 in terms of its “range, endurance, speed” and to also “extend the strike capability” by flying ahead of the B-21 in contested airspace. It has to be far less costly because “we would take more risk with an unmanned system that is not as expensive as the manned system.”

There’s “a pretty wide swath of things that could fit” that description, one of which is an unmanned B-21, he said. The aircraft may have to have large wings to carry the fuel necessary to do the mission, he said, but cost is the key variable.

“Once you put cost on there, just like we did with the B-21, that really tells what the design’s going to be,” Walden said.

Kendall noted that the B-21 followed the Next Generation Bomber project that was dropped because it was far larger and “cost about twice as much” as the B-21, noting, “we ended up with … a more affordable option.”

Walden said if companies can get “close” to the half-price level, “we’re interested.”

The Air Force has been working on an operations analysis to determine what the right number of unmanned bombers would be, but “we’re not there, yet,” Walden said. “The analysis will give us more insight.”

Asked if the new unmanned bomber could spell the beginning of the end for manned bombers, Walden said, “I don’t know. We’ve been doing bombers a long time. They’ve all been manned, and they’ve all been from the air. But that doesn’t mean you can’t do global strike from other means.” While he didn’t elaborate, the Army has been touting its land-based hypersonic missile as an instrument of “long-range strike,” and China has been experimenting with an orbital bombardment system.

The advantage of a manned bomber, though, is “you can actually recall it, if you choose,” Walden said.

After the concept of operations is set, there would be discussions with companies as to whether
“they … can build it,” Walden said.

“We’ve got the top-level requirement from the Secretary of the Air Force” to get things rolling, Walden said. There would be a risk-reduction phase followed by a preliminary and critical design review, and “from there, you figure out the source selection criteria by which you would downselect.” The RCO is “pretty good at doing that piece in a relatively fast way,” he said.