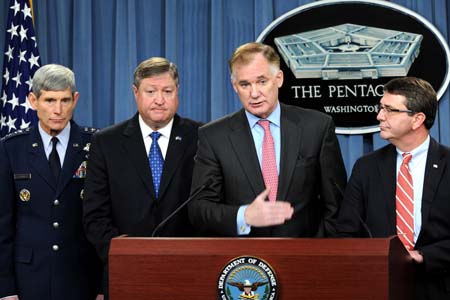 Force “designed” the acquisition strategy for the KC-X tanker around the possibility of a protest, Chief of Staff Gen. Norton Schwartz said in an interview. The prospect of yet another program-delaying protest loomed over the service as it was formulating its KC-X plan, Schwartz told the Daily Report Feb. 25, the day after the Air Force selected Boeing to be the KC-X supplier over EADS North America. Accordingly, Schwartz said, USAF exhaustively documented every step it took, kept contractors in the loop as much as possible, and did everything it could to avoid ambiguity—all in hopes of eliminating any cause for a protest. With the single exception of an errant page of evaluation data inadvertently provided to both contractors, Schwartz said he’s pleased with the performance of the source-selection team. He said no date was yet in place for debriefing the contractors. Only EADS can say whether it sees grounds for a protest, but Schwartz believes it’s time to “move toward fielding the capability, rather than talk about it.”