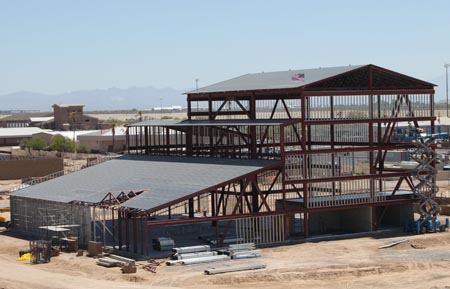 AFB, Ariz., is abuzz with military construction activity. In fact, it’s one of the busiest USAF sites in this regard, with more than $240 million in projects under way and the possibility for a total of twice that over the next five years. Among the MILCON, workers are erecting an HC-130J simulator building as part of the beddown of the new rescue tanker there and the establishment of a personnel recovery center of excellence. Due for completion this summer are the new Fire and Crash Rescue Station and new 144-person dormitory. Construction will start this year for a double hangar for the 309th Aerospace Maintenance and Regeneration Group that will be large enough to fit two KC-135s or 16 F-16s. Construction of a 350-room visiting quarters will start in Fiscal 2013. The base will also host a 170-acre 14.5-megawatt solar photovoltaic system. (Davis-Monthan report by 1st Lt. Michael Borradaile)