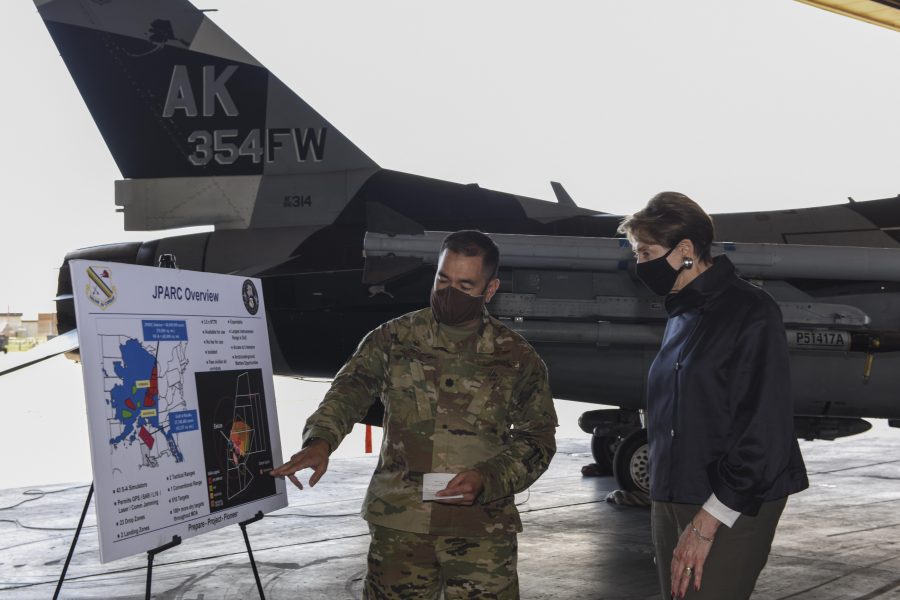 Despite a long history of Arctic operations, USAF has never had its own strategy for operating in the region. The White House first released a National Strategy for the Arctic in 2013 under the Obama Administration, and the Department of Defense soon followed suit with its own Arctic Strategy. That strategy was updated in 2016 and then again in 2019.

Barrett stressed the growing importance of the Arctic in a keynote address at AFA’s Air Warfare Symposium in February, calling it a “central mission” for the Air Force. “As in space, America is resolute in defending and protecting international norms of access and navigation as Arctic resources and sea routes gain importance,” she said. “That’s why maintaining strong defense relationships with Arctic nations who are willing to cooperate is critical. We stand with Canada, Iceland, Norway, Finland, Sweden, and Greenland, via Denmark. We are stronger together.”

The rollout comes only about two weeks after Barrett toured USAF Arctic locations, including Eielson Air Force Base, Alaska, which will soon be home to Pacific Air Forces’ first two F-35A strike fighter squadrons. The base—located some 100 miles south of the Arctic Circle and home to the Defense Department’s northern-most fighter wing—already has received its first six F-35s, and is on track to receive all 54 jets by December 2021, 354th Fighter Wing Commander Col. Shawn E. Anger told Air Force Magazine. Coupled with F-22 Raptors based at nearby Joint Base Elmendorf-Richardson, Alaska, the state will have more fifth-generation combat power than anyplace else in the world.

“The Total Force team at Eielson plays a pivotal role that extends throughout Alaska and projects into the Arctic,” Barrett said in a release. “Today, as competitors like China and Russia endeavor to expand their influence, the U.S. relies on our Air and Space Forces to protect our nation.”

Russia regularly flexes its military muscle in the region, but its power projection missions ramped up once the COVID-19 pandemic hit the United States. North American Aerospace Defense Command fighters have intercepted Russian bombers, fighters, and maritime patrol aircraft at least 10 times this year off the coast of Alaska, and most of those encounters came in June. U.S. Northern Command boss Gen. Terrence J. O’Shaughnessy said Russia is testing the U.S. military to see if the coronavirus has created any weaknesses, but he insisted the U.S. remains ready, “24 hours a day, seven days a week, 365 days a year.”

“If you go back in history, Russia has always operated with long-range aviation, and out-of-area flights that come into our Air Defense Identification Zone [ADIZ], and we were seeing that as a continuation of those efforts in the past,” Krumm said. “I don’t see anything dramatically different in the Russian aspect. We have been intercepting them when they enter our ADIZ, and we are conducting safe professional intercepts, and we expect to see them doing the same.”

Although O’Shaughnessy says adversaries such as Russia and China want to avoid direct military conflict, he told Senate legislators in February “their growing assertiveness increases the risk of miscalculation and gives rise to a threat environment more complex and dynamic than we have seen since the end of the Cold War.”

During her visit, Barrett also visited Clear Air Force Station in central Alaska, whose primary purpose is to provide surveillance and tracking of intercontinental ballistic missiles, as well as even more remote sites such as Utqiagvik (formerly known as Barrow, Alaska), and Kotzebue, a city in Alaska’s Northwest Arctic Borough, both of which could play a bigger role in USAF operations the Arctic gains importance.

“Secretary Barrett’s visit to Alaska highlights the strategic importance of the Arctic,” Krumm said in the release. “The Department of the Air Force maintains the majority of [U.S. military] forces in the region, with fighters, tankers, and surveillance aircraft, as well as systems and infrastructure to support our nation’s and allies’ interests while respecting the Alaska Native community and their environment. As human activity in the Arctic increases, the Air Force has shown that it is and will continue to be a leader in operating in this challenging and austere environment.”