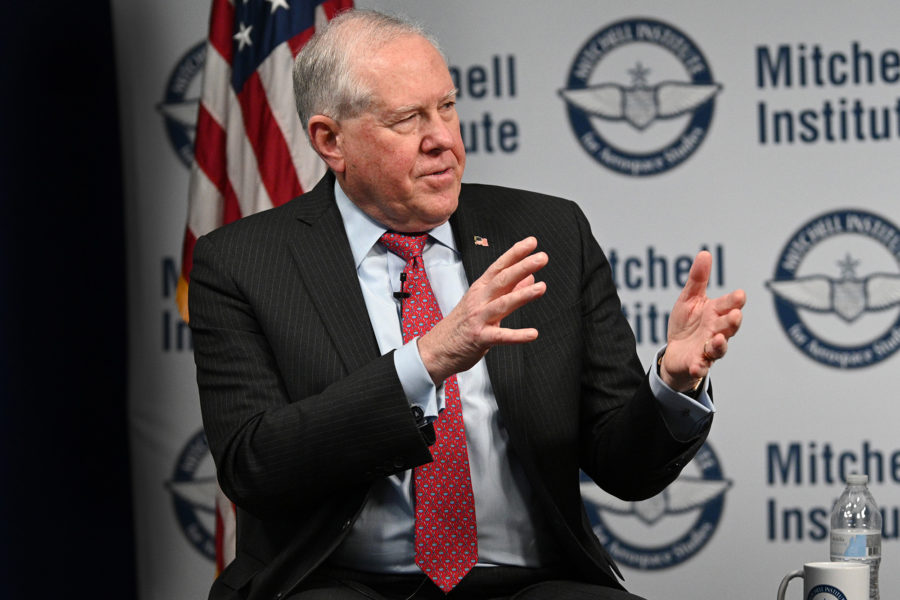 Secretary Frank Kendall and his two service Chiefs are sifting through Department of the Air Force technology efforts in search of the ones most likely to “make a difference” and be fielded, with plans to discard the ones that might be a lab success but impractical for operational service. The culling will be concluded in time for the fiscal 2024 budget request.

“In a world in which we were by far the dominant military power, we could afford to let a thousand flowers bloom,” Kendall said in an event streamed by the Air Force Association’s Mitchell Institute for Aerospace Studies. “We can’t do that anymore. We’ve got to focus our efforts on the things that we really need, or that are going to make the greatest difference on the battlefield.”

“We’re going to try to do some sorting, if you will, to make sure we’re focused on the things that have the highest payoff,” he added.

Kendall said he’s trying to bridge the so-called “valley of death” between laboratory successes and programs of record that lead to fielded systems. Too many concepts have “piled up” to pursue them all, he said.

“You have to be disciplined about the things you start,” Kendall said. “I’ve seen a few projects—I’ll be blunt—that I don’t think are ever going to go to the field, whether they’re successful or not. I’ve seen a few others that almost certainly should go to the field if they’re successful. And we need to distinguish [between] those two and emphasize the ones … in the latter category.”

Kendall, Air Force Chief of Staff Gen. Charles Q. Brown Jr., and Chief of Space Operations Gen. John W. “Jay” Raymond “are all going to be sitting down, looking at all of our programs in the [science and technology] world, particularly the demonstration projects, and trying to make a determination about whether we think that they will make the cut,” he said. The criteria will be cost effectiveness and affordability, “whether they would be operationally viable,” and whether “they’re going to confer an operational advantage that matters,” Kendall added.

Those that “meet those tests, we’re going to make sure they’re funded to go on” in the coming five-year plan, Kendall said. “And we’re going to try to accelerate the transition wherever we can.” Those not making the cut will get more analysis with an eye toward cost-effectiveness.

Many such projects sound good on paper, but those pushing them “don’t necessarily think through all the implications” of what fielding them would entail.

Kendall said there’s “no shortage” of innovation or technology, but “we need to make smart decisions” about what to pursue. While it’s too late for these choices to affect the fiscal 2023 budget submission, now in its final stages, Kendall said the work will be done in time for the 2024 budget request.

“Enough work has been done on the tactical level” to convince Kendall that the time is right to launch programs that will produce unmanned flying teammates for manned fighters and bombers.

“The technologies are coming together” in machine learning, autonomy, and aircraft design so that an unmanned fighter teammate could emerge at the same time as the Next Generation Air Dominance fighter, Kendall said. Such an unmanned fighter will be able to work with the F-35, he added.

“There are a lot of possibilities,” he asserted. Manned-unmanned teaming “opens up to you … some really interesting technical options that you don’t have when you only have manned aircraft, so we’re going to go forward with that,” he said.

“We’ll need a platform upon which to embed those technologies as they mature … [to] get to what I’ll call a minimum viable product.”

A bomber escort would be a different kind of platform, he said.

“I think there’s a lot of potential there as well, but I’m not as certain about what the rules of the uncrewed platforms are,” Kendall said. Would the unmanned platforms simply be off-board carriers of munitions, “or do they have more sophisticated functions? … And what degree of stealth might be appropriate?” Conceptual work is underway to make those determinations and “what the right mix is there.”

While he wouldn’t give a timeline as to when these systems would be in the hands of developmental testers and doctrine-writers, “My mantra for acquisition is, ‘Get meaningful military capability to operate as quickly as possible.’ And some of the programs I mentioned earlier, the technology programs, they’ll continue in parallel.” The unmanned aircraft, for example, will come along in “roughly the same timeframe” as NGAD.

“I believe operator experimentation is going to be a big part of this,” he added. Operators are very creative about “ways to use things that engineers like myself didn’t necessarily think about. And so we need to make that opportunity available as soon as we can.” He said it might be possible to do this work in simulation before the hardware is available, and “I hope we get the opportunity to do that as well.”

He also noted that his top seven technology priorities all have “co-chairs” leading them—“an operator and an engineer.” That way there will be constant feedback between what the operators need and what engineers can feasibly provide.

“I’ve felt for decades that this is the right way to approach this,” he said. Handing requirements to an engineer and waiting for the ultimate product “doesn’t work very well.”

Kendall’s imperatives, which he laid out in December, are: